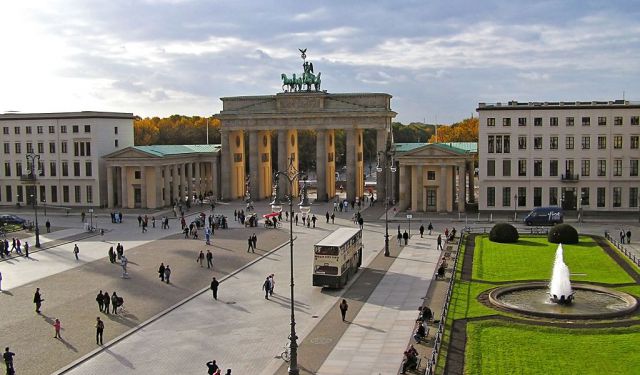 The Most Popular Sights, Berlin, Germany (A)

Filled with more monuments and famous attractions than you could possibly see in one day, sightseeing in Berlin can get a little overwhelming. This tour takes you to Berlin's most popular and recognizable sights within the city center giving you a comprehensive overview and a great introduction.
This article is featured in the app "GPSmyCity: Walks in 1K+ Cities" on iTunes App Store and Google Play. You can download the app to your mobile device to read the article offline and create a self-guided walking tour to visit the attractions featured in this article. The app turns your mobile device into a personal tour guide and it works offline, so no data plan is needed when traveling abroad.

Create Your Own Self-Guided Walks in Berlin
Guide Name: The Most Popular Sights
Guide Location: Germany » Berlin
Guide Type: Self-guided Walking Tour (Article (A))
# of Attractions: 8
Tour Duration: 6.0 Hour(s)
Travel Distance: 5.4 Km or 3.4 Miles
Author: Patrick Lind
Author Bio: Patrick M. Lind has been freelance writing since 2007. He received a Master of Arts in history from the University of Amsterdam in the Netherlands and has traveled extensively throughout the United States, Europe, Asia and Middle East. Patrick has called many places home including Chicago, Berlin, Amsterdam, Vienna, Austin and California.
Sight(s) Featured in This Guide:
1

The Fernsehturm, or television tower, was constructed by the government of East Germany between 1965 and 1969 with the intent of it becoming a recognizable symbol of the city. It measures in at 368 meters (1207 feet) and is the tallest structure in Germany. The observation deck puts you at 204 meters (669 feet) and allows you see up to 42 kilometers (26 miles) with clear visibility. The restaurant in the tower's sphere completes two rotations each hour. The Fernsehturm makes a good landmark for which to orientate. As it is visible from just about anywhere in Berlin, you will always know where to find the city center.
Image by Arild Vågen under Creative Commons License.
2

Construction of the Berliner Dom (Cathedral) began on June 17th, 1894 and was completed on February 27th, 1905. Based on Julius Carl Raschdorff’s plans, the Dom cost 11.5 million German Marks, approximately 180 million Euros. The cathedral features a high Neo-Renaissance architectural style. Its dome tower is 114 meters (374 feet) above the ground. The building suffered major damage during World War II. In 1940 a bomb blast blew out all of the windows, and in 1944 a firebomb struck near the base of the dome lantern. This caused the dome to collapse spreading fire throughout. Reconstruction began in 1974 and was reopened to the public in 1993.
Image by Dnsob under Creative Commons License.
3

Berlin’s Unter den Linden literally translates as “under the linden trees.” This famous boulevard begins just west of the now empty lot of the Stadtschloss royal palace and the Palast der Republik at the River Spree. Running east-west, Unter den Linden ends at the Brandenburg Tor. Along the way you pass by the main campus of Humbodlt University as well the Russian, Hungarian and American Embassies. Many tourist shops, restaurants and attractions like Madam Tussauds call Unter den Linden home. The original linden trees, which dated back to 1647, were cut down in the 1930s for resources; what trees remained were destroyed during World War II. The trees present now were replanted during the 1950s.
Image by VollwertBIT under Creative Commons License.
4

The Brandenburger Tor (Brandenburg Gate) was commissioned by King Frederick William II of Prussia and built between 1788 and 1791. It originally served as one of the city’s many gates. It is one of Berlin’s most recognizable monuments. The Berlin Wall passed just to the west of the gate in an arch and President Ronald Reagan used it in 1987 as the backdrop for his speech where he declared “Mr. Gorbachev, open this gate! Mr. Gorbachev, tear down this wall!” The gate opened again on December 22, 1989 as a symbol of a reunified Berlin. The Brandenburger Tor underwent a full restoration from 2000 to 2002.
Image by Stephan Czuratis under Creative Commons License.
5

The Reichstag housed the German parliament from 1894 to 1933 when a fire damaged much of the interior. During the Nazi-era, the Reichstag was rarely used except for propaganda and military purposes. The building suffered damage from the air raids during the Battle for Berlin in 1945. After the war, the West German government had moved to Bonn in 1949, thus the Reichstag fell into further disuse and neglect. It was formally reconstructed and refurbished between 1961 and 1964. On October 3, 1990 the official German Reunification ceremony was held here. The building underwent a complete overhaul during the 1990s, which included a new cupola designed as gesture to the original. It reopened in April 1999 and once again began hosting sessions of the German parliament.
Image by Zeeuwsebad under Creative Commons License.
6

The Holocaust-Mahnmal, or Memorial to the Murdered Jews of Europe, or simply the Holocaust Memorial, covers 19,000 square meters (4.7 acres) and consists of 2,711 slabs of concrete ranging in height from 0.2 m to 4.8 m (8" to 15'9"). Architect Peter Eisenman and engineer Buro Happold designed the memorial; it was officially inaugurated on May 10, 2005, the 60th anniversary of the end of World War II in Europe. Interpretation of the monument is left up to the individual as no names or explanations are found anywhere on it. The underground Information Center offers insight into the horrors of the holocaust. Construction of the monument cost 25 million Euros.
Image by Gryffindor under Creative Commons License.
7

During the 19th Century Potsdamer Platz was one of the busiest squares in Europe, with numerous S-Bahns, U-bahns and trams passing through it all day. It was a symbol of Berlin’s progressive nature, with new buildings constantly replacing old ones. World War II all but destroyed the entire square. During the Cold War, the Berlin Wall passed near the platz creating a no-man’s land characterized by barbed wire and empty fields. After the fall of the Wall, Potsdamer Platz became a large building site transforming it once again into a busy and popular square filled with contemporary skyscrapers, restaurants and entertainment facilities like the Sony Center.
Image by Norbert Aepli, Switzerland (User:Noebu) under Creative Commons License.
8

The most famous of all the Cold War-era checkpoints, Checkpoint Charlie connected East and West Berlin by way of a heavily armed gate and allowed authorized individuals to cross back and forth. It was the site of the Berlin Crisis of 1961 when armed American and Soviet tanks faced off for six tense days after a dispute concerning the examination of a U.S. diplomat’s documents. Since the Wall fell, the guardhouses were removed. Those standing now are replicas of the ones that stood at Checkpoint Charlie in 1961. The nearby Checkpoint Charlie Museum originally opened in 1963 and covers its entire history.
Image by Raymond - Raimond Spekking under Creative Commons License.