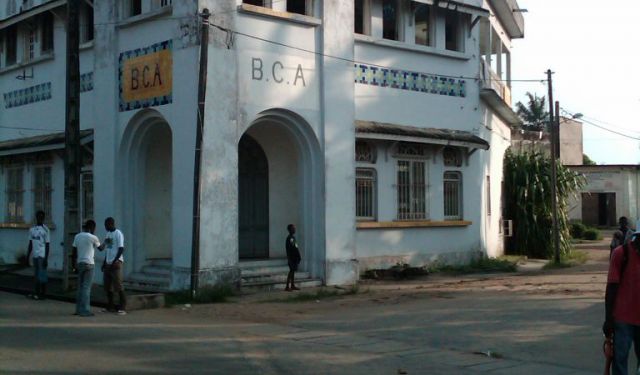 The Vestiges Tour in Bassam, Grand-Bassam, Ivory Coast (A)

Grand Bassam is the most alluring seaside town on the Ivory Coast. Besides, it offers important historical sights within only 15 km away from Abidjan. Do you want to see Africa, but aren't quite interested in big and modern cities like Abidjan? Do you want to take maximum advantage of a place enjoyed by so many tourists and not only because the sea and the sunny beach? Are you attracted by authentic vestiges? Then this Tour is for you!
This article is featured in the app "GPSmyCity: Walks in 1K+ Cities" on iTunes App Store and Google Play. You can download the app to your mobile device to read the article offline and create a self-guided walking tour to visit the attractions featured in this article. The app turns your mobile device into a personal tour guide and it works offline, so no data plan is needed when traveling abroad.

Create Your Own Self-Guided Walks in Grand-Bassam
Guide Name: The Vestiges Tour in Bassam
Guide Location: Ivory Coast » Grand-Bassam
Guide Type: Self-guided Walking Tour (Article (A))
# of Attractions: 8
Tour Duration: 2.0 Hour(s)
Travel Distance: 1.2 Km or 0.7 Miles
Author: Drissa Cisse
Author Bio: I am a professional and full time freelance journalist based in Ivory Coast, West Africa. I got a DESS that is a degree between Master and Ph-D in Communication. I also teach, in part-time, communication science at college.
Sight(s) Featured in This Guide:
1

The Victory Bridge is a construction which has seen the light of day in the 1930s. Stretching for about 25 meters long, the bridge links Quartier France with Topéwo Impérial-Petit Paris. The lagoon beneath is called Ouladine. The "Victory Bridge" earned its name and fame because of the historical "Walk of women" in Grand Bassam, which struggled to liberate their husbands who went to jail for political motives. Those brave men have collectively decided to go on a hunger strike until they would be released from their captivity. A few days later, their wives and many other women succeeded walking over the bridge and got on the other side of the lagoon. The prisoners were liberated. Since then, the Bridge of Quartier France serves as a souvenir of their victory.
2

The Traditional Costumes Museum is a renovated, three floors building. Originally, the museum, which had been built in 1893, was the Governor’s Palace. From 1893 to 1902, the Palace sheltered four governors of the Ivory Coast: Louis Gustave Binger, Eugène Bertin, Louis Moutet and Henri Charles Roberdeau. With two annexes (in which are located the personnel's rooms) and a big hut next to the main building, visitors will find a wide variety of exhibits, comprising statuettes, statues, and mainly traditional costumes. Obviously, this is how the Museum earned its name locals call "Costumes Museum". All the pieces exhibited here are made in the Ivory Coast, using the best kept secrets of handicraft, to the delight of anyone who passes its threshold.
3

The Court Building of Grand Bassam is a house entirely in ruins and abandoned today. Grass and other wild vegetation have taken over the surroundings and all left standing are its shrunk walls. This place which seems to have been an architectural jewel at its time, is standing today tragically forgotten. The Court Building which has sheltered so many trials, is now judged by history itself, some would say. Constructed in 1900 under the French colonization, it served as one of the Ivory Coast's first Courthouses. The building has two floors: the first one hosted the courtroom and upstairs were located the lawyers' offices. From 1900 to 1930, only White men were judged in this court. After a new colonial legislation, Black men were also sent here to find their justice.
4

This is a renovated building, also part of the cultural heritage of the Ivory Coast. The three floors house has recently been brought back to its original state, along with some other significant sites history demands not to be forgotten. The Governor Louis Gustave Binger began the construction of this building in 1898 and his fourth and last successor in Grand Bassam finished it in 1900. The place was divided into two sections: one for the Post Office and one for the Customs House. Why did two distinctive domains of activity work in such a conjoint manner? In colonial times, the post office and the customs were considered to be belonging to the same field. Since 2003, the restored Post Office and Customs House shelter the offices of the National Cultural Heritage, in charge of the capitalization and conservation of the city's landmarks.
5

The "Yellow Fever" virus is transmitted by the bite of female mosquitoes and is found in tropical and subtropical areas. The only known hosts of the virus are primates and several species of mosquito. Clinically, yellow fever presents in most cases fever, nausea, pain, but it generally subsides after several days. This disease belongs to the group of hemorrhagic fevers. From 1890 to 1899, Grand Bassam has seen successive epidemics of yellow fever that explained the colonial decision to relocate the capital city to Bingerville. The Yellow Fever Monument was erected to celebrate the memory of the deaths of the epidemics. The monument depicts a male victim of the disease laid on the ground and his wife by his side carrying traditional medicine, believed to cure the unmerciful "Yellow Fever".
6

Ceramics and ceramic art displayed at the Ceramic Center comprises objects such as figures, tiles, and tableware made from clay and other raw materials by the process of pottery. Fine art, decorative pottery and archaeological artifacts are for display and sometimes for sale, showcasing the best traditions the Ivory Coast artisans passed from father to son along the centuries. The building, which is a sort of colonial villa, is protected by a fence and located in a nice area of the city. The pieces are truly exquisite and what makes it all even better is that you are also allowed to take pictures.
7

7) The Central Bank of Africa

The Central Bank of Africa is a beautiful, three floors building. This white house represents, first of all, an architectural jewel in spite of all the time elapsed from its construction to nowadays. Even today, this building is one of the nicest houses that can be found in Quartier France, if not in all Grand Bassam. Built in 1900 under the fourth Governor of the Ivory Coast, it was the first bank to be established in the whole country. This bank is symbolic to the Ivorian economy because it favored for a long time trade in the capital city and between the town and other places in Africa or even France. Thanks to the Central Bank of Africa or (BCA in French), Grand Bassam became the business center of the Ivory Coast.
8

The Hotel, called Hotel de France because of Quartier France and also the mother country in Europe, was a huge, three-floors building. Being the Ivory Coast's first luxurious place, it was built in 1900s under the Governor Henri Charles Roberdeau using construction materials imported all the way from France. It was a red-light place only for the colonizers and exporters in transit. Facing the Central Bank of Africa, the hotel unfortunately has not been as fortunate as the bank and is now in a state of total neglect. The Hotel de France has become a distant souvenir. Looking at it now, you will find unbelievable the fact that this construction used to be the most beautiful building in all Grand Bessam.