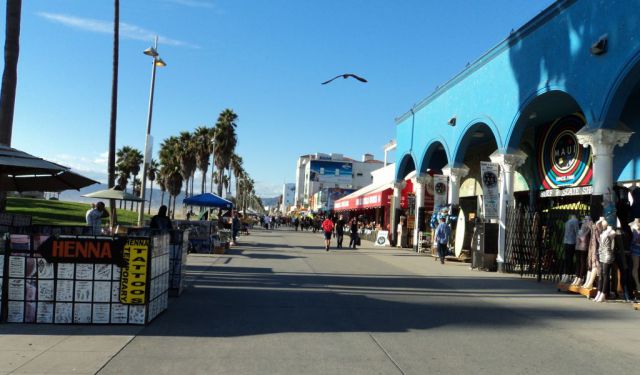 Abbot Kinney, a land developer, founded Venice Beach in 1905. The area became a magnet for tourists worldwide. Arnold Schwarzenegger got discovered at Muscle Beach and modern skateboarding was born here. As you stroll along the 3-mile boardwalk, expect to see the weird and unexpected. Numerous sidewalk cafes boarder the way accompanied by Henna tattoos, boutiques and Jamaican crafts. Need medical marijuana? You came to the right place.
This article is featured in the app "GPSmyCity: Walks in 1K+ Cities" on iTunes App Store and Google Play. You can download the app to your mobile device to read the article offline and create a self-guided walking tour to visit the attractions featured in this article. The app turns your mobile device into a personal tour guide and it works offline, so no data plan is needed when traveling abroad.

The new Venice Fishing Pier was resurrected from the one built in 1965 and damaged by El Nino storms during the 1980s. The pier was shut down until 1993 when voters passed a $10 million bond issue to renovate Ocean Front Walk. In the late 1990s the pier was ready for anglers.

Venice Fishing Pier is 1,310 feet long with a 120 feet diameter circular end providing plenty of room for fishermen. The fishing pier offers a few innovations, too. First, there are double railings at the end of the pier. The bottom railing is for anglers to rest their slimy bait, while the top is for visitors to rest their arms. Various areas along the pier are cut out sections with railings at a lower 28” level vs. the 41” level for the rest of the pier. These areas are for handicapped anglers’ wheelchairs. Most piers don’t have this thoughtful feature.

The nine Paddle Tennis Courts are well known to top paddle tennis players. Extremely busy on weekends, you may find it easier to get a court during the weekday. The First Annual Mr. Paddle Tennis Doubles Tournament was held here May 2, 2010.

Outside the fenced in courts you will notice street performers or buskers. There’s a mime that dresses in the same silver outfit all year long. Be careful not to walk by and take of whiff of this character. If you’re lucky, the break-dancers will be performing. That’s a show to catch. I’m sure you’ll run into the guy wearing a turban on rollerblades playing a guitar. He’s no Jim Morrison, so be prepared to cover your ears. Speaking about Morrison, he pulled together his band, the Doors, right here on Venice Beach.

Muscle Beach was founded in 1934 in Santa Monica, considered the birthplace of the physical fitness movement of the 20th Century. During its heyday, men, women, and even kids came to Muscle Beach to learn to perform athletic feats and acrobatic stunts to the delight of passersby. It wasn’t just about men building huge muscles. Female performers like Pudgy Stockton lifted a man with one hand. Reina Brewer could tear a book in half or wrestle men and toss them around like rag dolls. Unfortunately, the Santa Monica facility closed in 1959 due to difficulties in maintenance and supervision.

Muscle Beach Venice was established at this site in 1951. During its early days it was called “The Pen”. By the 1970s it became known as Muscle Beach because few people remembered the earlier Santa Monica location two miles north of this site near the Santa Monica Pier.

Famous physical fitness stars that developed their physiques at the Santa Monica site were Steve “Hercules” Reeves, Jack LaLanne, and Joe Gold. Here in Venice, the bodies of Arnold Schwarzenegger and Franco Columbu were developed.

Venice Basketball Courts is the place to shoot some hoops. From coast to coast these courts are famous for the intensity of street basketball. Many players come here to develop their craft with the hope of being discovered, like so many other NBA players. There are three full courts, six hoops for daytime games. The movie, “White Men Can’t Jump,” was filmed here.

Directly west of the courts is the Venice Bike Path. Like the courts, it has been in movies and TV shows. The path extends 8.5 miles from Washington Blvd near the Fishing Pier to Temescal Canyon to the north. Roller bladders, bikers, and joggers use the path as it winds by shops, restaurants, and under the Santa Monica Pier and beyond. The plans for the bike path were first divulged during the late 1890s. The current path was proposed during the 1960s and was finally approved in 1988. Beachfront homeowners managed to stonewall the final construction of the path, but finally the last segment of the path was completed in 1989.
5

The Venice Pavilion, built in 1961, was comprised of pristine white walls. This didn’t last for long. Back then, the walls were called the “Graffiti Pit” and it was illegal to paint on them. However, the local police and residents tolerated the vandalism. In 1999 the Pavilion was torn down, but these walls were preserved as a living memorial to the high quality artwork that had been painted on them for 25 years.

Perhaps to the chagrin of a few stealth artists, in 2000 it became legal to paint graffiti on the walls. However, with legality came rules. In stepped the Curator, Creative Unity (ICU Art), a Venice based graffiti art Production Company. The walls were renamed Venice Art Walls in 2007. Painting on the walls can only be allowed by permit on weekends when ICU Art is present to supervise.
6

The Venice Beach Skate Park opened October 3, 2009. It is a 16,000-square-foot facility that cost $2.4 million. The skate park has four main sections: a deep pool, street terrain course, a snake run and a flow pool. The unique design brings together street and vertical skating. This permits skateboarders to flow in and out of the different styles. The deep pool provides a maximum differential of 9 feet so a skater can pick up lots of speed in a single entry/exit run. The street terrain course simulates the traditional street environment where skateboarding first evolved.

When Los Angeles renovated Venice Beach from 1999-2001, skateboarders requested the city build this park to honor the history of their sport, which started in Santa Monica and Venice beaches during the 1970s. Local skateboard aficionados provided designs, which helped create this challenging arena. I watched a video of a six-year-old without front teeth scale inclined walls and defy gravity better than most of us can walk. This is an impressive skate park venue to see.
7

In 1905 land developer, Abbot Kinney, erected an amusement park on a pier right here at Venice Beach. To protect the pier, the Venice Breakwater was also built. Today, it is the only place along the Venice coastline where waves break on both sides. The fine sand located on the beach is great for sand sculptures. Winter is the best time to surf here because storm swells produce 5-7 feet point-break waves. Thousands of surfers have hauled their boards here over the decades because it's the most surfable spot at the edge of L.A.'s crowded coastline. Over the years, the jetty of rocks caused immense sand buildup on the ocean floor. These two combined ingredients have produced the exciting rides surfers search for. Yo-Venice!