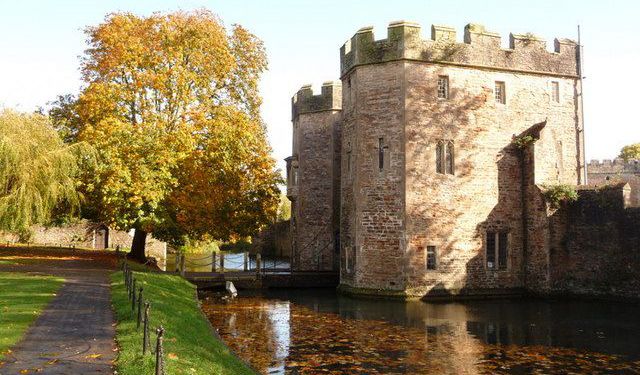 The medieval city of Wells is steeped in antiquity and heritage. Full of architectural grandeur and an inviting charm, the famous historical sights of England's smallest city are all easily accessible on foot and best viewed over a slow, warm afternoon. Follow this guide for an intimate tour one of England's most picturesque cities.
Image Courtesy of Wikimedia and Chris Downer.
This article is featured in the app "GPSmyCity: Walks in 1K+ Cities" on iTunes App Store and Google Play. You can download the app to your mobile device to read the article offline and create a self-guided walking tour to visit the attractions featured in this article. The app turns your mobile device into a personal tour guide and it works offline, so no data plan is needed when traveling abroad.

Create Your Own Self-Guided Walks in Wells
Guide Name: Wells - City Orientation
Guide Location: England » Wells
Guide Type: Self-guided Walking Tour (Article (A))
# of Attractions: 8
Tour Duration: 1.0 Hour(s)
Travel Distance: 0.9 Km or 0.6 Miles
Author: Fraser Balaam
Author Bio: Burdened with a permanent wanderlust and a nose for misadventure, when I'm not travelling I spend my time thinking and writing about it over several cups of tea in my coastal home in south west England.
Sight(s) Featured in This Guide:
1

Located in Silver Street and facing onto the ever tranquil recreation ground, The Bishop's Barn is a surviving 15th century tithe barn which was built using local stone and was also once used as Royalist troops quarters during the Bloody Assizes in 1685 (the trial of rebels following the local Battle of Sedgemoor and end of the Monmouth Rebellion in England). A grade 1 listed building, The Bishop’s Barn is one of the best surviving examples of a tithe barn in Britain and even Europe, its original purpose being the storage of farm produce that was required to be donated to the church.
Image Courtesy of Derek Andrews.
2

The moat surrounding the palace provides for a stunning waterside walk. Around the corner from the drawbridge which serves as the entrance to the palace (which is interestingly no longer retractable) is a small bell which, historically, the swans of the moat were trained to ring when they require food. Charmingly this tradition continues and two of the resident swans are able to call for food service. The northern corner of the moat has a rather quaint waterfall, and on every August bank holiday the moat becomes a racetrack for the annual Wells Moat Boat Race, a charity event featuring an array of rudimentary rafts.
Image Courtesy of Ivan Hall.
3

Market place is arguably the focal point of Wells. Beautifully intact, Market Place is plenty to look at and contains the famous conduit, originally a gift from Bishop Bekynton in 1451. The head of the shopping area in Wells, markets are held every Wednesday and Saturday when a spread of stalls and vivacity take over Market Place. At the top of Market Place you’ll see the Bishop’s Eye, an alluring gateway to the principal sights of Wells. Market Place is also notable for being the location for many scenes in the iconic 2007 British film Hot Fuzz, including the climactic shoot-out.
Image Courtesy of Geof Sheppard.
4

A fortified palace surrounded by the serenity of the moat and waterfall, Bishop's Palace has been home to the Bishops of Diocese Bath and Wells for over 800 years. The main palace and gardens are open to the public and offer a tranquil enclosure of lawn croquet and more enticing displays of medieval architecture. The chapel and gallery are also accessible, as is a restaurant in the palace. The building dates from 1210, and despite being mostly used for functions, the bishop still has a residence in the north wing of the palace.
Image Courtesy of Jph1066.
5

The pride of Wells, the Cathedral was built between 1175 and 1490 and seats the Bishop of Bath and Wells. The staggering early English architecture on display is so powerful that many critics believe it to be the most impressive Cathedral in England. The interior showcases more breath taking architecture and a labyrinth of rooms crammed with historical prestige, such as the Chapter House steps that date from the early fourteenth century, and astronomical clock complete with mechanical knights that joust on the hour. Films such as Academy award nominated Elizabeth and popular British film Hot Fuzz have filmed inside the Cathedral, and in 2009 it held the funeral of Harry Patch, Britain’s last surviving veteran of the First World War, who passed away having reached the noble age of 111. After spending time to take in the majesty of the Cathedral, take the chance to relax on the green and bask in the enchantment of the city.
Image Courtesy of Stewart Black.
6

Housed in the former Chancellor's House adjacent to the Cathedral, the Wells and Mendip Museum is teeming with geological artefacts and installations. Despite the quaint and homely premises, the museum boasts various rooms of collections from Stone and Iron Age artefacts discovered locally (including an arresting skeleton thought to be the remains of a local witch) to an almost overwhelming array of geology. The museum is effortlessly quirky with its uneven floor levels and alcoves, satisfying any interest you might have in the local area whilst amply catering for passing intrigue, all for a paltry £3 entry fee.
Image Courtesy of Rodw.
7

The exterior face of the Cathedral, opposite Vicar’s Close, is home to the outside section of the astronomical clock which was constructed around the fourteenth century. The more impressive half of the clock, with a face depicting the universe, is housed inside the Cathedral itself on public display. Interestingly, the current Keeper of the Great Clock of Wells announced his retirement in August 2010. The current council authority in Wells is planning to install an electric motor to the clock meaning that the process of hand winding the clock will come to an end, having been manually wound since 1386.
Image Courtesy of Elliott Brown.
8

A magnificently preserved medieval cobbled street next to the Cathedral, Vicar's Close is reputedly the oldest purely residential street with its original buildings intact in Europe, and is remarkable to look at. Vicar’s Close dates from the mid-fourteenth century and, interestingly, the street narrows towards the end which makes it look longer from the entrance. The gateway has a pedestrian and wagon entrance and the obvious historical elements of Vicar’s Close make it one the most charming aspects of Wells. Many of the residences, originally built to accommodate the chantry priests, are Grade 1 listed buildings and three are currently used by Wells Cathedral School.
Image Courtesy of Nic Trott.