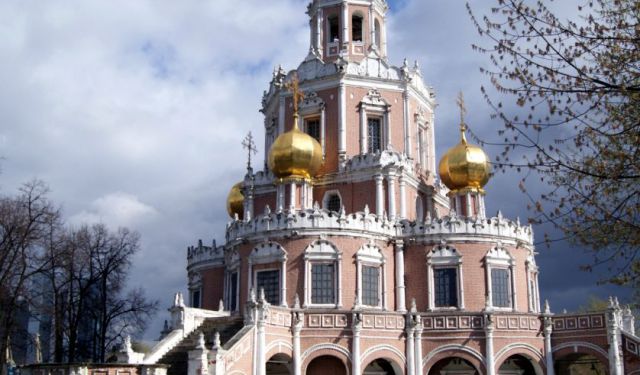 This guide presents you the most magnificent churches and monasteries of Moscow, located in the city center or close to it. Most of them have a long and rich history and have played an important role in the history of the country. The oldest ones date back to the 13th and 14th century and represent examples of old, traditional Russian architecture, others have been demolished and have been rebuilt from the ashes not so long ago.
Image Courtesy of Wikimedia and Sergey Rodovnichenko.
This article is featured in the app "GPSmyCity: Walks in 1K+ Cities" on iTunes App Store and Google Play. You can download the app to your mobile device to read the article offline and create a self-guided walking tour to visit the attractions featured in this article. The app turns your mobile device into a personal tour guide and it works offline, so no data plan is needed when traveling abroad.

1) Ivan the Great church and bell-tower

Situated in the center of Kremlin, this church is one of the oldest in Moscow. It was founded in 1329 by the Muscovite Prince Ivan Kalita, who began uniting Russian lands under Moscow's power thanks to his wealth and wit. The church is famous for its splendid bell-tower (81m) constructed in 1600 under Tzar Boris Godunov. It is seen far beyond the Kremlin's walls and has 24 bells. In 1812 the church was blown up by Napoleon’s soldiers, but later, in 1815-1816, Russian architects and builders gave it a second life. Nowadays the church is as a historical museum, and has a striking multimedia exposition inside, which allows you to see how Moscow looked many centuries ago: the pictures are projected directly on the ancient walls.
2

The Assumption Cathedral in Kremlin is not only an architectural masterpiece, it is also a site of high historic value - a place where Russian Great Princes and Tzars were crowned before Peter I, the Great, moved the capital to St. Petersburg. The Cathedral, as we see it, was designed, as well as the Kremlin Towers, by Italian architect Aristotle Fioravanti. The interior is richly decorated with precious wall paintings and icons of the 16th and 17th centuries. Here one can see the praying places of the Tzar, Tzarina and the Patriarch - majestic thrones made of intricately carved wood in the mid-16th century.
3

Archangelsky Cathedral was founded in the 14th century by the Muscovite Prince Ivan Kalita. Since then, it has served as the burial place of the late Ryurikovich and the early Romanovs - the great Russian royal dynasties. The Cathedral is remarkable for its history-inspired wall paintings, which depict the prominent Russian rulers of the past - from Olga, the first Russian princess who turned to Christianity, to Ivan the Great.
4

This masterpiece by Russian architect Konstantin Ton was built to commemorate Russian soldiers and officers who fought against Napoleon's army in 1812. Its construction took almost 44 years, the quay and the square in front of the magnificent temple were finished in 1881, with participation of some prominent artists of the epoch, like Surikov, Vereschagin, Klodt. In 1901, a choir was founded in the temple, and it was considered the best in Moscow. In 1931, in the full swing of anti-religious persecutions, the temple was blown up with intentions to build the huge Palace of Soviets in its place. However, the project failed, and a large open swimming-pool «Moscow» was constructed instead. The new temple, reconstructed following old plans and pictures, was completed in 1996.
5

St. Basil's Cathedral is a wonderful church which strikes the viewer with its fantastic combination of colors and shapes. It was named after the famous Muscovite saint and prophet, Basil the Blessed (Vassiliy Blazhenniy), who lived in the 16th century working miracles in the name of God and helping people in need. Legend says it was the saint himself who collected the money for the construction of the church before his death and gave it to Tzar Ivan IV (who was not yet called «The Terrible»). Another legend says that Ivan ordered to blind the Cathedral's architects Barma and Postnik so that they couldn't create anything similar. However this legend has little credibility, since chronicles of the time claim that Postnik participated in the construction of the Kazan Kremlin, so he could not have been blinded by then.
6

This is a bright example of Baroque architecture in Moscow. This is a rigid five-domed building designed by the Italian architect Pietro Antonio Trezzini, the godson of Tzar Peter the Great. Besides its elegant silhouette and five round turrets, the temple stands out for its beautiful ancient iconostasis of carved wood with icons of the 18th and 19th centuries.
7

This old church built in 1682 stands on the bank of Moscow river and faces the Kremlin. It is known and liked for its breathtaking white bell-tower, which resembles a bride at the wedding – slender and straight, richly decorated with thin columns, carved stone ornaments and wrought metal grills. It looks very much like a piece of Venetian architecture: the resemblance is increased by its proximity to the river. St. Sophia's church is also known for an interesting tradition - weekly tea parties with the priest for everyone who wants to ask a question on Christian religion.
8

The temple of the late 17th century stands in front of the Kremlin, in Zamoskovrechye District. It is a nice monument of the so-called «Moscow Baroque», which stands out with its elegant lines and fine decorations. This remarkable, five-domed temple was famous for its beautiful bell-tower and the pleasant sound of its bells. The bells disappeared soon after the Revolution, when the temple was closed.
9

This is one of the most beautiful and unusual architectural monuments of classicism, hidden in the streets of Tagansky district. The first building of the temple was constructed in 1600 under Tzar Boris Godunov, but the temple obtained its modern look in the late 18th century. Its main feature is an eye-catching rotunda with a triple row of windows; in past centuries it used to be seen from far away, and the windows create beautiful light effects inside the church. It is also known for its precious old icons – particularly the one of Saint Simeon and the Russian Saint Dmitry Rostovsky.
10

While walking on the small streets adjacent to Tverskaya, you will sooner or later run into the beautiful Gothic church of St. Andrew's (this architectural style is quite rare in Moscow). St. Andrew's church was built specially for the British community in Moscow, it was designed by architect Richard Knill Freeman, who had already built a lot in England. He sent the plans for the church, which is a typical Victorian Gothic, to Moscow. The Church was named for the Apostle St. Andrew, the patron of Scotland. This is not surprising, as the Scottish were the most respected and richest members of Moscow’s British community. In the same year, the organ was installed - the building was famous for its acoustics. Nowadays the Church not only welcomes worshipers, but also hosts classical music concerts.
11

The Catholic Cathedral of Immaculate Conception is perhaps the most beautiful building in Presnya district – a large neogothic building with numerous sharp towers pointing at the sky and stained glass pictures in the high windows. It was built in 1901-1911 using donations from the Polish community in Moscow. The cathedral is designed for 5000 occupants and holds masses in 8 languages (including Vietnamese and Korean).
12

This magnificent cathedral was built in 1845 using generous donations from the parish. Many prominent Russian people – artists, scientists and writers came here to pray. The church survived the Revolution, and for a long time after the Temple of Christ the Savior was destroyed, this was the principal Russian cathedral. In 1941, at the breakdown of the Great Patriotic War, it was the place from where the Metropolitan Sergiy gave his blessing to Russian soldiers to fight against Nazi troops.
13

This is one of the two official Lutheran churches in Moscow. It was founded in the 17th century by the German community headed by General Nicholas Bauman (at that time, Russia often invited German engineers and army officers). As fires happened often in Moscow at that time, the church burnt down several times: the last time in 1812, during the Napoleonic invasion of Moscow. The final neogothic building that we see nowadays dates to 1862. In 1936 the Cathedral was closed, and the building became the office of “Diafilm” studio. In 1992 it was returned to the Lutheran Church. The Cathedral is proud of its organ constructed in 1898 by German Master Wilhelm Sauer and invites the best Russian and foreign musicians to play there.
14

Novodevichy Monastery is situated in a romantic place at the bend of Moskva River. The Monastery was founded by Prince Vassily III to celebrate the regaining of Smolensk city from the Great Duchy of Lithuania. It is well known in history as the place where the most noble women of old Russia became nuns, including widows and daughters of tzars. For some of them, like princess Sophia, the sister and the main rival of tzar Peter the Great, the monastery became a prison.

The cemetery of the Novodevichy Monastery hosts the graves of Russia's most famous artists, writers, statesmen, warriors and scientists. Bulgakov, Stanislavsky, Eisenshtein, Skryabin, Shalyapin – to name just a few.

Donskoy monastery is situated in the South-Western part of Moscow. It was founded at the end of the 16th century by Tzar Feodor (who died very young without leaving direct heirs) to honor the Donskaya Icon of Virgin Mary. According to legend, it helped Moscow's troops repel a violent Tatar attack from Crimea. The monastery is made of 2 cathedrals, 7 churches, 12 towers and 1 bell-tower. It also has a large cemetery, divided in two parts – the Old one, dating to 18th-19th centuries, and the New one.
Image Courtesy of Lodo27.
16

The monastery was built in the 14th century and many times «shielded Moscow from its enemies» as chronicles say. Having survived numerous Tatar attacks, the monastery was partially destroyed much later – in 1930. Two towers and 5 of the 6 churches were blown up on the 6th anniversary of Lenin's death. In their place, the Soviet authorities ordered the construction of a cultural center for the workers of the ZIL automobile plant. It is a monument of Soviet constructivist architecture and is still in operation.

The monastery is now in reconstruction, but you may enter the yard to take a look at the ancient wall and beautiful towers. They still look abandoned, but this gives them some sort of sad romantic charm. If you are lucky enough to meet the masters who work on the interior reconstruction, they may show you some wonderful pieces of their work – stained glass, carved wood and hand-wrought metal detailing.

Zaikonospasskiy monastery is situated in the heart of Moscow, near Kremlin and was founded by Tzar Boris Godunov. In the 17th century it hosted the first public school in Moscow and some time later – the first Russian academy, which prepared statesmen, clergymen and scientists. The monastery is proud of its magnificent Spassky Cathedral.
18

The Epiphany Temple stands at the place of the former Epiphany Monastery - one of the most ancient in Moscow (founded by Prince Daniel in 1292). Many times the monastery and the temple were destroyed by Tatar assaults, and the current building was constructed in the late 17th century; its another striking example of the so-called "Moscow Baroque". The Temple is known for its beautiful choir and icon painting school. Near the temple's gate you can see the monument to the founders of the first Russian Academy - the Likhoud brothers, Greek by origin, who greatly contributed to Russian science and culture.