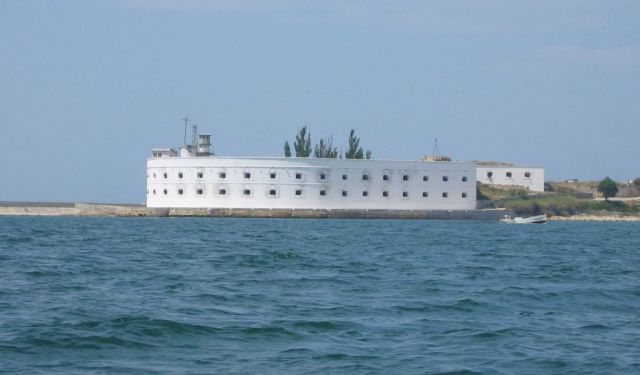 Sevastopol, the city of 360,000 on the Black sea coast of Crimean Peninsula is famous mostly as a battlefield of the Crimean War in 1854-1855 and World War the Second in 1941-1942. Thus 7 out of 15 sights included to this directory guide are tied to both of the city’s defenses. In the meantime Sevastopol is a rapidly becoming the popular tourist destination.
This article is featured in the app "GPSmyCity: Walks in 1K+ Cities" on iTunes App Store and Google Play. You can download the app to your mobile device to read the article offline and create a self-guided walking tour to visit the attractions featured in this article. The app turns your mobile device into a personal tour guide and it works offline, so no data plan is needed when traveling abroad.

The Count's Quay is a prime historic and architectural monument of Sevastopol. It is located in Admiral Nakhimov's square. The quay’s name is tied to count Voinovich, who was the commander of the Black Sea Navy in 1786-1790. The Count's Quay was built in 1780 as a wooden dock for boats, and in 1787 the wooden steps were replaced by stone ones.

The best description for the Count’s quay is given by www.castles.com.ua : “ One of the main symbols of Sevastopol, a city-naval base for Ukrainian and Russian Black Sea fleets and a scandal center of NATO-phobia in the Crimea, is Grafska (Count's) Quay. Today it has its old name back, but in early Soviet years the quay was named after the revolutionary Third International (a communism organisation also known as The Comintern).”

The Sevastopol Aquarium is located on the main promenade, in the basement of the Ukrainian National Research Institute of Marine Biology, named after A Kovalevskiy. It was established in 1897, thus being one of oldest in the world and still the only one in the Ukraine. There are several pools inside with sizes of up to 40 square meters. More than 180 kinds of fauna are displayed. Highly recommended. Monday is the day off.
4

Pokrovskiy Cathedral is the main Orthodox church of Sevastopol. It was founded in 1892 and finished by 1905 as per the project of local architect Valentin Feldman. It was closed in 1921 by the Soviets and reopened by the Germans in 1942. The Cathedral served the local Orthodox community until 1962, when it was turned into a gym and local archive. It was again reopened as a Cathedral in 1992.
5

The fortress was built in 1829-1840 at the edge of the Severnaya (the Northern) bay of Sevastopol. It originally had a battery of 94 guns. In June of 1942 it was turned into a battery of the so-called “Konstantinovskiy defense district”. After losing it's primarily mission the fortress was turned into an armed forces monument and still fires a daily gunshot into the sea at noon.
6

The Malakhov Barrow is a memorial complex and a popular leisure place for the locals. The complex itself is dedicated to the first defense of Sevastopol in 1854-1855 and does include a park with the Alley of Friendship. The trees there were planted by celebrities, including the first Soviet cosmonaut Yuri Gagarin. During the Crimean war, in the Sevastopol siege of 1854-1855, the Malakhov Barrow was a key in the defensive line, covering the city from the east. It is named after the Staff-Captain Malakhov.
7

Calamita is a fortress built in the 6th century AD on the plateau of the Monasterial rock near Inkerman, a suburb of Sevastopol. The territory behind the walls is vast at 1500 m2. The Southern and Western sides of the fortress were well defended by the deep ditch and there were also six towers tied by the walls.

There are mainly ruins now, but still a sight worth seeing.

8) The monument to Admiral Nakhimov

Pavel Nakhimov (born July,5th 1802 at Vyazma, died July 12th 1855 in Sevastopol) was the famous Russian Navy admiral and the commander of the Sevastopol garrison during the city’s siege in 1854-1855. Nakhimov’s parents were nobles originating from Sloboszanshina region of Eastern Ukraine. The admiral started his naval career at the age of 13 while joining the cadet corp in St.Petersburg. He was granted the leytenant’s rank while being on board the “Cruiser” frigate, under admiral Mikhail Lazarev's command in 1821-1825, and spent most of his naval career as the commander of the “Navarin”, “Pallada” and “Silistria”. In 1854, he was asked to be the commander of the Sevastopol garrison and was deadly wounded on July 10th, 1855, while inspecting the batteries at Malakhov barrow. The monument to admiral Nikhimov was built in 1958.
Image Courtesy of Russianname.
9

The Promenade in Sevastopol is spread between the Nakhimov Square and the Aivazovsky lane that does cross Nakhimov avenue at the edge of the Hotel Sevastopol. The boulevard is a very popular place of leisure for the locals and tourists alike. The boulevard was set in 1885 as per the project of Sevastopol’s chief architect Alexander Veizen.
10

The monument to captain Aleksander Kazarskiy (born June 16th, 1798, died June 16th,1833) is located at the Northernmost spot of the Central hill of Sevastopol. The monument was built in 1834-1839 by local architect Aleksander Brullov, the elder brother of famous Russian poet Carl Brullov. The monument is dedicated to the episode dated May 14th, 1829 when the 18-gun "MERKURIY" under Kazarskiy’s command faced two Turkish ships, the "SALAMIE" and "RIAL BEY", in a fierce marine battle.
11

The quarters were designed in order to accommodate 6000 Russian Navy crewmen, that were based around the southern bay of Sevastopol. The architect of the Lazarev quarters was engineer Colonel John Upton, originally from the UK. In 2000, the barracks were restored while being turned into the local branch of the Moscow State University.
12

12) The monument to Pyotr Koshka

This monument was open in May of 1956 in commemoration of Pyotr Koshka, one of the famous participants in the city's defense of 1854-1855. The sculptors were Joseph Keyduk and Vasily Keyduk. Pyotr Koshka was born in 1828 and was originating from Western Ukraine. The undisciplined, yet very much courageous sailor turned into a real legend of Crimean war mostly due to his night raids on the positions of the Coalition troops. It is claimed that Koshka, armed with only a knife, managed to capture himself three French soldiers.
13

13) The Memorial wall at Nakhimov's Square

The Memorial wall in Sevastopol was constructed in 1964 at the edge of the Admiral Nakhimov square.

There is a total of 19 memorial plaques with the names of regiments of the Soviet Army and Black sea navy that took part in the city’s defense in 1941-1942. The whole composition is united by the shape of a soldier stopping the tanks. The architects were Artyukhov, Kalinkov and Sdobnyakov.

The Flooded Ships monument is considered the main sight in Sevastopol. The monument was built in 1904 by the Estonian sculptor Amandus Adamson and the local architect Valentin Feldman in commemoration of the 50th anniversary city’s siege in 1854-1855 when seven Russian Navy vessels were flooded in order to block the way to the main bay of Sevastopol. The monument’s height is almost 17 meters with a bronze eagle atop.
15

The tower of winds was built as a part of the Maritime library in 1849. After the rest of the building was destroyed and burnt up during the city’s siege in 1855, the tower of winds turned into a local monument. The tower has an octahedral shape and there are arched openings on top of it. The walls covered with images of mythical gods of winds and the masks of lions look really exciting.