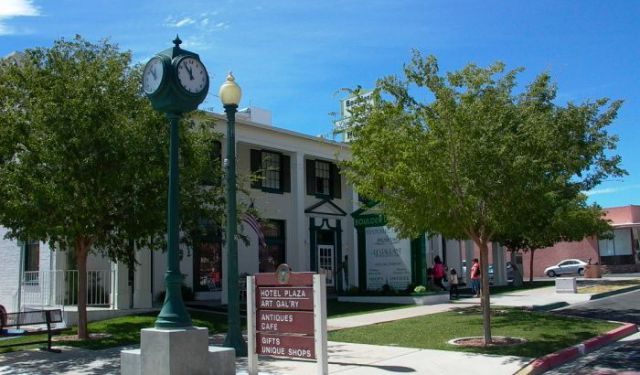 We'll explore one of the more unique cities in Nevada, learn why many of these structures came into being, and how it helped make Hoover Dam and Lake Mead a reality. The tour is less than 2 miles long and is packed with landmarks, historical information, and panoramic views.
This article is featured in the app "GPSmyCity: Walks in 1K+ Cities" on iTunes App Store and Google Play. You can download the app to your mobile device to read the article offline and create a self-guided walking tour to visit the attractions featured in this article. The app turns your mobile device into a personal tour guide and it works offline, so no data plan is needed when traveling abroad.

Government and efficiency are words rarely used in the same sentence, but here we are in Boulder City, Nevada, to observe our government’s first attempt to fabricate a community. And to their credit, they did a pretty good job.

We’re standing in the center of what was planned as a model community. Construction on Hoover Dam began a year early in the spring of 1931 at the height of the Great Depression and Boulder City, which was supposed to be already built, was rushed to meet the demands of a growing labor force. Most cities start with a center and expand out, but Boulder City had to sacrifice organic growth for a more conservative and efficient design.

Built within a triangular-like shape, the most important people lived and worked at the top of the hill and the least important services occupied the lowlands. If you look down Arizona Street, there are three parking plazas surrounded by arcades. This section of town was planned as the commercial district and in its day, arched arcades covered the sidewalks, and beautiful signs were mounted on the fascia. Many of the storefront arcades have been restored. By today’s standards, Boulder City’s compact design may seem simplistic, maybe even idealistic, but the city had to be built quickly. More than twenty-two thousand men worked on Hoover Dam and they and their families needed some kind of housing. The dam was completed in 1935 and together they weathered the 20th Century quite well.

Like something out of “Gone with the Wind,” the Boulder Dam Hotel is the true jewel of the neighborhood. Completed in 1933, it stands alone in architectural design and charm. In its day, the hotel was the preferred lodging for government V.I.P.’s, as well as dignitaries and celebrities, eager to monitor what was then, not only the largest public works project ever attempted, but the “Eighth Wonder of the World.” The hotel is still the most popular place to stay. The hotel features a Dutch-Colonial motif and offers twenty-two quaint rooms with all the modern amenities. And if that’s not enough, their restaurant is known for the best breakfast in town. The hotel is a popular spot for weddings and receptions.
3

Housed in the rear of the Boulder Dam Hotel is the Boulder City and Hoover Dam Museums. If you have any interest at all in Hoover Dam, this museum is a must see. Packed with exhibits, interactive displays and documentary movies, you’ll the whole story of the Boulder Canyon Project. The admission is only a few dollars. There is also a gift shop with every book ever written about Hoover Dam. And while we’re on the subject, let clear up the Boulder Dam, Hoover Dam name. Originally, the dam was supposed to be built in Boulder Canyon, which is about ten miles upstream from where the dam is built now, but an earthquake fault was found so the project was moved to Black Canyon, where the dam is now. President Herbert Hoover was very instrumental in getting the dam approved and it was being called Hoover Dam at the time, but he was partly blamed for the great depression and voted out of office before the dam was completed and consequently his name was dropped from the project. It wasn’t until the mid 1940’s that Congress reversed the decision and Hoover Dam became the permanent name, at least for now.
4

This stretch of Nevada Highway holds 3 landmarks. The building that houses the café at the end of the shopping district was built in 1931 and was the first commercial structure built in the city. I don’t know what they sold, but by all accounts it wasn’t liquor or lottery tickets. Gambling is still prohibited in Boulder City and alcohol was banned until the federal government gave up its control of Boulder City in 1968. The big official-looking building across the street was originally called the Bureau of Power and Light, was built in 1940, and houses one of the two utility companies contracted to operate the power generators at the dam and distribute the electricity to the appropriate communities. It's now occupied by the Department of Water and Power. The park was named after Frank T. Crowe, the Construction Superintendent of Six Companies, the outfit that built the dam. He supervised construction on nineteen dams and was so inventive at new construction techniques, he was able to complete Hoover Dam two years ahead of schedule – and seven million dollars under the fifty-four million dollar budget. The park hosts many civic events including the annual Christmas tree lighting ceremony.
5

Built in 1932, this big brick building was the City Water Purification and Filtration Plant. During the Dam’s construction, water was needed for the residents in town. A twelve-inch water main ran from town to the Colorado River six miles away. It took four pumping stations to move the water up the 2,000-foot elevation difference. Because the Colorado River is such a muddy river, the water was treated at several pre-sedimentation plants before it was finally purified and softened at this facility. Only then was it delivered to the local residents. The Plant is still functional, but isn’t used anymore. Next to the plant is the Reflections Center Park built be a local group called the 31’rs, to reflect the year Boulder City was built. Besides being a great place to sit and enjoy the landscaping, the park displays seven sculptures that are changed annually.
6

This park is named after Secretary of the Interior, Ray Wilbur and is a beautiful centerpiece for what is a very unique city. Wilbur Square is the largest of the two parks with Bicentennial Park nested below near City Hall. Both of the parks are used for holiday celebrations and are ideal spots for a picnic. At the southwest corner of the park is an enormous cast steel turbine runner which weighs over 34 tons. If you look carefully, you'll notice it resembles a waterwheel, much like the waterwheels of old that were used to process grain. But this one was used massive amounts of water flowing at 80 mph to turn one of 17 gigantic hydro-electric generators at Hoover Dam.

Here’s an interesting story about the park’s namesake. After the dam was approved, Secretary of the Interior, Ray Wilbur, came to survey the situation. Las Vegas lobbied hard to be the hub of construction, but Wilbur, a stern supporter of prohibition, was quick to sniff out the corruption hiding in every back room and alley. In what was a snub to Las Vegas’ hopes, Wilbur announced that a government-controlled town would be built closer to the dam site and ordered the construction of a railway to his new city. In addition, alcohol, gambling, and prostitution were banned here too. With thousands of men coming to work, it didn’t take long for the Las Vegas brain trust to recognize the windfall coming their way. Gambling was legalized in 1931, prohibition ended in 1933, and Las Vegas never looked back.

This is a great place to take in a lot of sites. The mountains directly across from us are called the River Mountains. These mountains extend up to Lake Las Vegas about 8 miles to the northwest and are also a backstop to the city of Henderson. In 1998, Boulder City, Henderson, and Lake Mead Recreation Area agreed to and built the 35-mile long River Mountains trail, a paved pathway that circles the River Mountains, giving access to hikers, cyclists, and equestrians. The area between the mountains and your bench is called Hemenway Wash. This is where the government built train tracks to the dam. Although the rails are gone, you can still walk the trail that leads to the dam. The Historic Railroad Tunnel Trail is a flat 2-mile walk that skirts Lake Mead and offers some wonderful vistas and photo opportunities. It’s ironic that this view is so wonderful, considering the Bureau of Reclamation’s Headquarters is across the street and the brick house you just passed was the residence of Frank Lowry, the chief engineer on the dam. Power brings special privileges, but in those days there was no Lake Mead, no pretty view; only a cut in the earth six miles away where the Colorado River snaked its way through Boulder Canyon toward the dam site in Black Canyon. What is now a beautiful lake, was once scrub brush, train tracks, and miles and miles of desert.
8

This is the Bureau of Reclamation’s Regional Headquarters. They are the governing body that oversees all operations relating to Hoover Dam. They are also the second largest supplier of wholesale water and hydroelectric power in the American West. Leave it to the government to take the best lot. The building was built in 1932 and housed the engineers and staff during the construction of the dam. The one-story building to the right was originally built and used as the dormitory for unmarried government workers. With a large turnover of engineers and supervisors, something was needed to house them. The Bureau of Reclamation oversees the use or misuse of the nation’s natural resources.
9

This is St. Christopher’s Episcopal Church. It was built in 1932 and is one of the oldest churches in town. Considering work on the Dam began in 1931 and the Great Depression had devastated millions of people, first hundreds, then thousands of men of all faiths came to work. Over the fours years of construction over twenty-one thousand men worked here. Times were hard and living conditions were even harder. I’m sure the pastors in those wretched times had their hands full. And I’d wager more than one prayer was vocalized to lower the summer heat. This is a beautiful structure and it is still used today for services, weddings, and other church functions.
10

This stately building was the first school in town and was built in 1932. Congress appropriated seventy thousand dollars for it’s construction, but it wasn’t enough to finish it. Six Companies, the outfit building the dam, pitched in the rest of the money to complete the job. The building is now used as City Hall. The building faces beautiful Escalante Park.

And just down the street is the 728 seat Boulder City Theater. Built in 1932, it was not only used as the primary entertainment facility, it housed the City Hall, hardware store, library, and the Police Department. The theater is still used for civic productions.