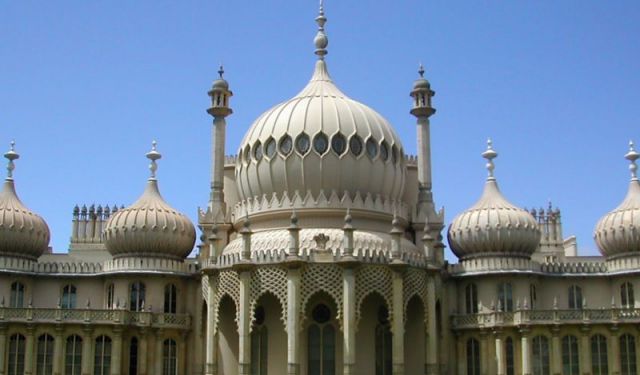 A circular walking tour, exploring the best of Brighton’s Victorian and Regency past. From the humble fishing quarter and historical seafront to opulent palaces, landmarks and theatres, the tour takes in nine of Brighton’s top historical sights. This centrally located tour starts a short walk from the train station and maintains close proximity to the Brighton’s shops, coffee shops and restaurants..
Image Courtesy of Wikimedia and Svencb.
This article is featured in the app "GPSmyCity: Walks in 1K+ Cities" on iTunes App Store and Google Play. You can download the app to your mobile device to read the article offline and create a self-guided walking tour to visit the attractions featured in this article. The app turns your mobile device into a personal tour guide and it works offline, so no data plan is needed when traveling abroad.

Create Your Own Self-Guided Walks in Brighton
Guide Name: Brighton Historical Places
Guide Location: England » Brighton
Guide Type: Self-guided Walking Tour (Article (A))
# of Attractions: 10
Tour Duration: 2.0 Hour(s)
Travel Distance: 2.0 Km or 1.2 Miles
Author: Lucy Grewcock
Author Bio: A Brighton resident for more than four years, Lucy fell in love with the city when she first visited in 2000, and decided she HAD to live here. Lucy loves exploring her home-town as much as far-flung destinations. Her adventures have included measuring glaciers in the Arctic, monitoring Orangutans in Borneo,learning Mandarin in China and guiding school children around Brighton and the South Downs.
Author Website: http://www.lucygrewcock.com
Sight(s) Featured in This Guide:
1

This eccentric ‘party palace’ was built for King George IV between 1787 and 1823. Conceptualising the character of the Regency era, the exotic palace was sold to the city in 1850 for £53,000 and has since grown to represent all that is fun and flamboyant about Brighton. As Brighton’s best known landmark, it is also the symbol of the City Council.

Pink wallpaper that’s almost fluorescent, sculptures with moving eyes and paintings which mock the King’s sexuality, it’s hard to believe that this palace was decorated in the 17th century. But it’s obvious how such unconventional architecture and décor provided ultimate escapism for the reluctant King. Each room more impressive than the last, one of the highlights is the theatrical banqueting hall, the site of George’s jaw-dropping feasts, which could consist of over 70 dishes. The room is lit by a 30 foot high chandelier, hanging from the claws of a silver dragon.

The Pavilion gardens is a popular outdoor meeting place in the summer months and often the site of the city’s ice-skating rink in the winter. You’ll find a decent café at the western end.

Here you'll also find the Brighton Museum and Art Gallery - another section of the former Royal Stables, this time refurbished by local brewer and social reformer, Henry Willet, in 1873. This impressive building, which benefitted recently from a £10 million renovation, is home to a stylish collection of world art, furniture and fashion. Salvador Dalí's ‘Mae West's Lips Sofa’ and costumes from King George IV's 1821 coronation can be found here amongst many other renowned artworks..

The fashion and style gallery within the museum epitomises Brighton’s trendy and flamboyant reputation. With pieces from the Regency era to the modern day, each reflect different aspects of Brighton life. The Performance Gallery is home to an impressive collection of world puppets, masks and musical instruments, and the Exploring Brighton Gallery tells the story behind living, working and revelling in the city.

Open Tuesday to Sunday, as well as public holidays, from 10am - 5pm. Admission is free of charge.

Brighton Dome is found on 18th century Church Street. Once part of the Pavilion Estate, this stunning structure began life as the royal equestrian buildings and is now a renowned arts and entertainment venue.

Designed by William Porden, the architecture was inspired by paintings of India and incorporates a 19 metre high glass dome which, at the time, many thought would collapse without scaffolding. Listed for both its exterior and interior architecture, The Dome houses striking examples of 1930s art deco.

Since its conversion in 1860, The Dome has undergone several developments, the latest of which was funded by supporters including the Philharmonic Orchestra, Nigel Kennedy and Fatboy Slim. Performers including Jimi Hendrix, The Rolling Stones, Pink Floyd and ABBA have all appeared here.

The Theatre Royal was constructed and opened in 1807, whilst the Royal Pavilion (opposite) was still being developed, the theatre was built on land purchased from the Prince of Wales and is one of the five oldest working theatres in Britain. To this day, its intricate exterior has been largely untouched. The Theatre Royal was also one of the first in Britain to install gas lighting (1819).

Opening at a time when Brighton was transforming itself from a small fishing village to one of Britain’s most fashionable seaside resorts, its opening performance featured Charles Kemble playing the role of Hamlet. A period of repetitive bankruptcy followed, as Brighton fell out of favour for London entertainment. However, the railways brought a new boom era for the theatre, at a time when it was managed by the formidable Mrs Chant, who is said to haunt the Theatre Royal today, along with four other kindly ghosts.

The hand painted sign for 'The Lanes' marks the entrance to the ancient ‘twitterns’ of Brighton's famous South Lanes. This is the heart of the original fishing town, known then as Brighthelmstone. The Lanes developed into a focal point of the town and continued to expand as the population of the small fishing town grew along with the successful fishing industry.

As Brighton developed into a popular Georgian seaside resort, the Lanes fell out of vogue and were considered 'unworthy' of the city’s noble reputation. But by the 1970s, they were back in fashion. Today, this intriguing jewellery and antiques quarter is one of the city's top attractions.

The listed buildings and cobbled streets of these narrow paths are rich in historic tales, spanning several centuries. Allow yourself to get lost exploring the narrow alleys – look out for the dagger shop, oyster bar and age-old pubs. When you’ve finished wandering, aim southwards, exiting the Lanes along Black Lion Street. Here, Charles II is said to have made his escape to France on the back of a fisherman. Black Lion Street, like many others, has been significantly widened. It also houses one of the Lanes' oldest buildings, The Cricketers Arms (1545).
6

Duke Street was originally used as a diversion from the steeper main road (North Road) for horse-drawn buses during the Victorian era. However, the popularity of this route led to significant congestion, meaning that the northern side of the street was demolished in 1870s and the road was widened. This is why you’ll notice that the buildings on the north side are uniform, Victorian terraces, and the assortment of buildings on the south side show the bow-fronted architecture of an earlier era.

Today, Duke Street is traffic-free and home to fashionable shops, restaurants and cafes - a great place to stop for a coffee or snack.
7

Queen Victoria’s Clock Tower is also known as the Jubilee Clock Tower. Built in 1887 to commemorate the Queen’s golden jubilee, the tower is located at the crossroads of two of Brighton’s earliest Streets: North Street and West Street.

Powered by hydraulics, its 100kg gold-plated bronze ball was designed to rise and drop on the hour, but rumour has it, that following noise complaints from local residents, the ball is no longer in use.

Recently renovated, the tower is made of pink granite and limestone, and features intricate portraits of Queen Victoria, Prince Albert, their son and his wife, the future Edward Vll and the Princes of Wales.
8

Middle Street has existed since 1500. This area of the city was originally known as ‘Hempshares’. Hemp was grown here on allotments between the houses and used to make fishermen’s nets. About half way up the street, you pass one of Europe’s most beautiful small Synagogues, Middle Street Synagogue. This Grade II listed building was opened in 1875, to meet the needs of an expanding Jewish population. The building created a new community focal-point and also incorporated a school house. Throughout the 19th century the synagogue received much benefaction and gained a reputation for housing one of the finest examples in the country of Victorian applied art, much of which remains in excellent condition today.

Part of an ancient fishing quarter, the esplanade was once dominated by fishermen and fishmongers, selling their catch. Stall holders and entertainers would frequent the esplanade - a trend which still continues today. The 19th century arches which cut beneath Kings Road are now home to a selection of bespoke local artists – take a while to browse here first.

Further along, the fishing museum, smoke house, working fishmongers and seafood stalls can be found, reminding locals and visitors of the seafront’s historic past - stop here to try and oyster or a mug of hot fish soup. Brighton’s fishing industry is very much alive still today and freshly caught fish can be bought along the seafront. The working smoke house uses traditional, organic methods, using oak and applewood to smoke the fish.

There are many other bars, cafes and restaurants along the seafront for refreshments.
10

Welcome to Brighton’s famous pier, designed by the architect George Moore. Construction began in 1891 and Brighton Pier took ten years to complete. This amusement emporium has attracted sightseers since the late 19th century and today it is visited by over two million each year, who come to enjoy the fairground rides, slot machines and take in the architecture one of Britain’s most impressive piers.

Entry to the pier is free, but costs for the many funfair rides and arcade games vary; there’s no cashpoint here, so make sure you take plenty of change if you want to make the most of the attractions here. The pier has several fast food outlets and a bar located at the far end. Opening times are 11am until 5pm every day of the year, except Christmas day. Extreme weather conditions may dictate changes.

The town of Bristelmestune is first mentioned in William the Conqueror's Domesday Book of 1085. In 1810 it officially became Brighton. The area of Brighton has known settlements since the Bronze Age. It experienced Celts, Saxons, Romans. But the train stopped with the arrival of the Normans in 1066.

When Conquering William took the helm, Bristelmestune was a fishing village of 400 souls....  view more

No trip to Brighton is complete without a stroll along the seaside. Here you will know right away that you’re in an English seaside resort, catching the scent of fish and chips and watching deckchairs fluttering in the breeze. Stretching along the pebbly coastline for nearly 5 miles, Brighton's promenade has that Victorian glamour with a dash of youthful energy and style, buzzing with life...  view more