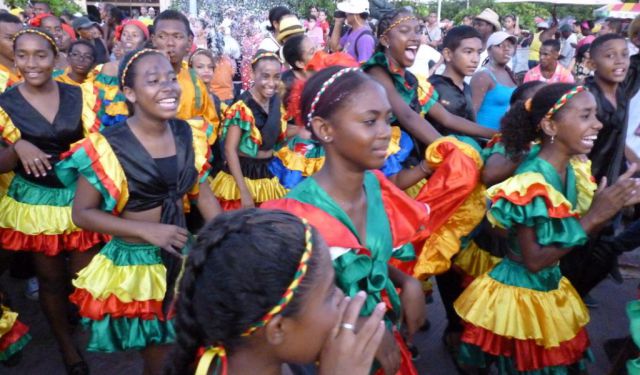 Cartagena Churches, Museums and Sights guide, which takes about two and a half hours to complete. It starts by exploring churches in the perenially popular Calle de La Media Luna in the suburb of Gestemani and then takes you to the historic center of Cartagena, where the walk takes in a further five churches, five museums, one seaview walk and one old dock.
This article is featured in the app "GPSmyCity: Walks in 1K+ Cities" on iTunes App Store and Google Play. You can download the app to your mobile device to read the article offline and create a self-guided walking tour to visit the attractions featured in this article. The app turns your mobile device into a personal tour guide and it works offline, so no data plan is needed when traveling abroad.

This church was built between 1654 and 1674 and dedicated to the medieval French saint, Saint Roch (1295-1327). Considered a miraculous saint who, after becoming ill himself from tending the sick, became associated with miraculous appearances of water where the sick required it, and so the Spanish authorities decided to build a church in his honor due to yellow fever being rife in the area at the time. The main altar of the church is notable for its simplicity while the wooden roof is definitely worth taking a look at.
2

This church was founded at the beginning of the seventeenth century after the then Bishop of Cartagena is recorded as having petitioned the King of Spain to build a church in the already heavily populated suburb of Gestemeni, which was outside the walled area of the city center. The building's design was based on that of Cartagena's cathedral. Particularly notable is that the archangel Michael is displayed in a painting on the altar, which was repainted by artist Peter Alaix Tiburcio Ortiz in 1868.
3

As you come out of the suburb of Gestemani you encounter this large church. It may be worth crossing the road at this point to get a better overall view of the front of this church. Also known as the Iglesia de La Tercera Orden (Church of the Third Order) this building was begun in 1555 and finished in 1628. It has white interior and exterior walls and facade but it is the wooden ceiling which is the highlight of this church. It is said that the remains of the famous Spanish admiral Blas de Lezo (1689-1741), notable for his defense of Cartagena, are buried in the church.
4

To get to the Plaza de la Paz, also known as Plaza de los Coches, and which was a for a time used as a slave market, you have to go through one of the tunnels in which sellers plie their artistic wares and which pass right under the 19th century Puerta del Reloj (literally the Doorway of the Clock). It is in the plaza itself where you can get the best views of this tall, steeple like building. There is also a statue of Pedro de Heredia, the Spanish soldier who founded the city of Cartagena on the tenth of January, 1533, standing with a scroll of the deeds founding the city in his right hand. The statue is not completely historically accurate in that in real life he had had his arm cut off in an earlier incident. Pedro supervised the construction of the first wooden buildings to appear here, having described Cartagena as dry, lacking water and vegetation.
5

This museum mostly focusses on temporary exhibits and will take up to half an hour to view completely. Part of the building was built in the second half of the seventeenth century by the Spanish crown and was the customs building for Cartagena. The Museum was opened in 1979 and before that the place was known as the Sala de Armas (Room of Weapons). The Organization of American States (OAS) gave a donation of Latin American paintings from the fifties. It is open from 9-12AM and 3-6PM from Monday to Saturday and the entrance fee is 5,000 Colombian pesos.
6

This church was built by the Jesuits in 1603, and dedicated to San Pedro Claver (1580-1654), a Spanish Jesuit priest, who, after being ordained in Cartagena in 1616, became known for his defence of black people of African origin, who were at the time the victims of the open slave trade exisiting in Cartagena and the Spanish Empire. Known for going from door to door collecting in aid of them, he was known as the "Slave of the Slaves" for this charitable work. His remains are entombed in a glass coffin in the main altar of the church. Attached to the Iglesia is the Convento de San Pedro Claver, an enormous three storey building with an open courtyard dominating its interior. There is a charming statue outside the Museum in Plaza San Pedro Claver of the saint in deep conversation with a black slave, contrasting the different clothes worn by the two men.
7

This museum first opened in the sixteenth century. It has exhibitions relating to the Military Naval History of Cartagena, Universal Navigation, the Colombian Navy and includes information that is regularly updated, while also containing material about the Spanish and early Republican eras. The building has two interior gardens as well as two storeys and a fine staircase. The west wing of the building was constructed in the 17th Century. Since 1985 the museum has been the official museum for the entire Caribbean under the auspices of the OAS. It is open from 10AM-5.30PM and the entrance fee is $US5.
8

This plaza was originally named after the Convento Santa Teresa, which was founded in 1609 by Doña María Barros y Montalvobut who came here with a group of nuns from Pamplona in Spain. The plaza only came into existence after part of the convent was knocked down. In 1811, soon after Colombia became an independent republic the Convent dissolved and the building first became a prison before turning into a factory and then a school before becoming the main police station in Cartagena. The building which housed the convent is now restored in an orange color and is in actuality the Hotel Charleston, which you can see from the plaza.
9

The walls of Cartagena, known as Las Murallas, were built towards the end of the sixteenth century in response to the pirates attacks of Sir Francis Drake and the English which seriously threatened Cartagena as it was entirely unprotected at that time. Having to deal not only with continued pirate attacks but also damage from storms meant that the walls took two centuries to complete. You can walk on the walls in many parts, including on the western side where the walk takes us along this western wall for a short while where you can stop and enjoy both the Spanish era cannons and the views out over the Caribbean Sea.
10

The sculpture of La Gorda (the fat woman) of a reclining nude in bronze by contemporary Colombian sculptor Fernando Botero (born 1932) is the highlight of this very simple plaza which is otherwise dominated by a restaurant and is always full of young Colombian men trying to sell artwork (often of local buildings and the church itself in pencil). There is a legend that when the Santo Domingo church was just being finished the Devil grabbed the tower and tried to knock it down but failed and so jumped down to a nearby well where the current plaza is located, whose holy water gave off a strong smell of sulphur before the well became sealed off completely.
11

This was the first church to be built in Cartagena and its construction was completed in 1579. There is also a convent that has been here from the beginning and which was originally known as Convento San Jose though as Dominicans took it over it was re-dedicated to Santo Domingo in the sixteenth century. The church was the second to be built in this part of what would become Colombia, one already having been built in the nearby city of Santa Marta. Though the church was originally constructed where the Plaza de Paz is now located it was then moved to its present location after the original burned down in a fire that destroyed the whole city in February 1552. In 1761 the building had to be substantially restorede after earthquake damage, and this was a long, slow process. Due to it being a very heavy church the walls have had to be fortified with buttresses in recent times.
12

This building was completed in 1770. The courtyard, with its old specimens of Spanish cannons and statue of indigenious people is particularly worth taking a look at. There are many other artefacts, especially of war implements from the period when Colombia was a part of the Spanish Empire and Cartagena a vital strategic port. It also contains some charming models of buildings and ships from that period. Unfortunately the place does not translate their informative placards into English, but ask if you want an English speaking guide. The entry fee is 13,000 Colombian Pesos and the palace is open 7 days a week from 9AM to 6PM.
13

This splendid Plaza, with its views of the Palacio de la Inquisicion, was originally known as Plaza de la Catedral. By 1610 it had changed its name to Plaza de la Inquisicion (Plaza of the Inquisition) and the first publicly recorded execution of a heretic took place here in 1614. After Colombia became independent in 1810 it was renamed after Simon Bolivar (1683-1730), the leader of the campaign to liberate various South American countries from Spanish colonial rule. There are records of bullfights having taken place here in the 1890s.
14

This museum, which opened in 1982, contains collections of both gold and pottery from the Zenu culture which existed along the Caribbean coast of Colombia as well as somwhat inland, and whose people thrived from approximately 200BC to 1600AD. They also constructed major feats of water engineering. The collection includes 538 pieces of gold work produced by these people as well as 61 examples of ceramica, 48 made from shells and 6 from bone. Entry to this museum is free and it is open from 10 to 1AM all week, 3 to 7PM Monday to Fri, and till 5PM on Saturday and 4PM on Sunday.
15

This cathedral, also known as Catedral Santa Catalina de Alejandria de Cartagena de India, was originally constructed in 1535, two years after Cartagena itself was founded, and was built using bamboo and straw, but was then consumed in a fire in 1552. The current building is the third that has been constructed on the site and the current tower was erected at the beginning of the twentieth century. Four impressive life size statues on the north side of the church are of San Pedro Apostol, San Pablo, San Gregorio and San Sebastian.