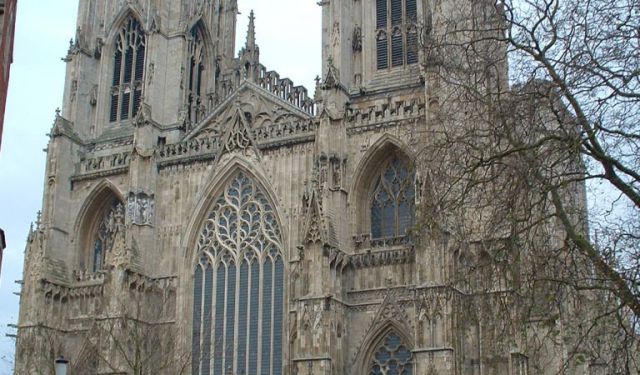 York is known as the "Capital of the North" and, with such a rich heritage of history and culture, it is easy to see why. We will guide you around the most popular attractions in the city and give you a flavour of what York has to offer. So if you want to experience an exciting range of things to see and do in this most vibrant of cities, this is the tour for you.
Image Courtesy of Wikimedia and Andy Barrett.
This article is featured in the app "GPSmyCity: Walks in 1K+ Cities" on iTunes App Store and Google Play. You can download the app to your mobile device to read the article offline and create a self-guided walking tour to visit the attractions featured in this article. The app turns your mobile device into a personal tour guide and it works offline, so no data plan is needed when traveling abroad.

Create Your Own Self-Guided Walks in York
Guide Name: City Attractions Tour, York
Guide Location: England » York
Guide Type: Self-guided Walking Tour (Article (A))
# of Attractions: 8
Tour Duration: 6.0 Hour(s)
Travel Distance: 2.8 Km or 1.7 Miles
Author: Steve Bradley
Author Bio: I am a 41-year-old freelance writer from York. I have lived in the city since 1987. I enjoy sampling the many wonderful pubs and restaurants in the city, as well as taking my dog for long walks around the beautiful green fields surrounding York. I hope my guide will help make your visit to York a special one.
Sight(s) Featured in This Guide:
1

Set on a tall mound in the Eye of York, Clifford’s Tower is almost all that remains of York Castle, which was originally built by William the Conqueror, and on whose site the Castle Museum now stands. York Castle Museum is one of Britain's leading museums of everyday life, and is named after York Castle, which once stood on the site. The museum gives visitors the opportunity to travel back in time and experience first-hand what life in Britain was like in years gone by. Authentic re-creations of shops, rooms, streets and even an ancient prison cell, augmented by a huge collection of historical household objects, will take you on a thoroughly enjoyable and nostalgic trip back in time. If you think that museums are dull, lifeless, places filled with dusty artefacts then think again. The museum opens between 09:30-17:00 every day except 25/26 December and 1 January.
Image Courtesy of Steven Fruitsmaak.
2

Between the years 1976-81, archaeologists from York Archaeological Trust excavated and uncovered the houses and workplaces of ancient Jorvik on the very site in Coppergate where the Jorvik Viking Centre now stands, revealing an amazing insight into life in the city over 1000 years ago. No visit to York is complete without an enjoyable, and educational ride in one of the state of the art time capsules at Jorvik, where you will experience the sights and sounds, and even the smells of the old-Norse speaking citizens of ancient York. Opening hours are 10:00-17:00 (April-November) and 10:00-16:00 (December-March). The Jorvik Centre is closed 24/25/26 December.
3

Shambles was voted the most picturesque street in Britain in 2010 and it is easy to see why. The ancient buildings are so close together that you can easily imagine people chatting from the upstairs windows across the bustling street below. Shambles is mentioned in the Domesday book (making it over 900 years old), which makes the cobbled street York's oldest, as well as being Europe's best preserved, medieval street. Shambles was historically a street full of butchers. In fact, in 1872 records show there were 26 butchers shops trading on the street. There are now many restaurants, curio shops and galleries to be explored, as well as the bustling York market right next door, and the picturesque King’s Square at the top of the street, where you will usually find one of the various street performers putting on a show. It is also the starting point for many of the guided ghost walks. If you want to feel the spirit of York, then visit Shambles.
Image Courtesy of Christian Bickel.
4

At just over two miles, York has more length of city walls still intact than anywhere else in England, with some sections of the walls dating back to Roman times. The four main entrances into York city centre, known as Bars, are all part of the city walls, and act as access points for visitors. We will start at Monk Bar, nearest to the minster, from where a walk in either direction will take in Bootham, Micklegate and Walmgate Bars before arriving back at Monk Bar – within 5 minutes of the next attraction on the tour. It is free to walk the city walls. They are open to the public from 8:00am every day except Christmas Day. The closing process begins at dusk at Fishergate Postern and takes approximately one hour.
Image Courtesy of Christian Bickel.
5

The minster is the focal point of the city of York. Completed in 1472, this gothic cathedral is one of the largest in northern Europe, and is the seat of the Archbishop of York. The minster has survived both air raids and the fires of 1829 and 9 July 1984, which destroyed the roof of the South Transept. The minster is open to visitors and is strongly recommended. It is possible to climb the tower and take in the spectacular views of the city and the surrounding Yorkshire Dales.

No sightseeing on Good Friday and Easter Sunday

The magnificent building which houses the York Art Gallery opened its doors to the public in 1879 for the second Yorkshire Fine Art and Industrial Exhibition, which was inspired by the Great Exhibition in London of 1851. Later, in 1892, the building became the City Art Gallery. The building looks out over Exhibition Square, also created in 1879, and beyond to the city walls and the picturesque Low Petergate, which leads to York Minster. The centrepiece of the square is a statue of York-born artist William Etty which was erected in 1911. The gallery houses works ranging from 14th century Italian panels to modern 20th century pieces from artists such as LS Lowry and David Hockney. York Art Gallery is open daily from 10:00-17:00, except on 25/26 December and January 1.
Image Courtesy of Stanley Howe.
7

The Yorkshire Museum and the surrounding botanical gardens make a perfect place to relax, while still savouring the atmosphere of the city centre. The museum – one of the oldest in Britain - has recently re-opened after an extensive refurbishment, and offers many new exhibitions and galleries. The ancient ruins of St. Mary’s Abbey dominate the museum gardens, while other historical sites and buildings to be found in the ten-acre site include the York Observatory, the medieval Hospitium and the remains of St. Leonard’s Hospital. The Yorkshire Museum is open daily from 10:00-17:00, except for 25/26 December, and 1 January. The museum gardens are open daily from 07:30-18:00 until 28 March (from then until late October the gardens open later into the evening). Entry to the gardens is free.
Image Courtesy of Kaly99.
8

The National Railway Museum was opened in 1975 in a huge former steam locomotive depot. It has been extended many times since, particularly in 1990 when Station Hall was opened on the other side of Leeman Road, but don’t worry about crossing a busy street to get to it, as there is an underground tunnel to make it easy. The NRM is a former winner of the European Museum of the Year, and houses a vast collection of locomotives, memorabilia and railway artefacts. A visit to the NRM is a perfect way to end a day in York, particularly as it will entertain the children (there is a mini-railway and themed children’s playground) and there is the excellent Signal Box Cafe, where you can recharge your batteries after a day exploring the wonders of York. York railway station is only a five-minute walk from the museum. The National Railway Museum is open from 10:00-18:00 daily and admission is free!
Image Courtesy of Dashwortley.