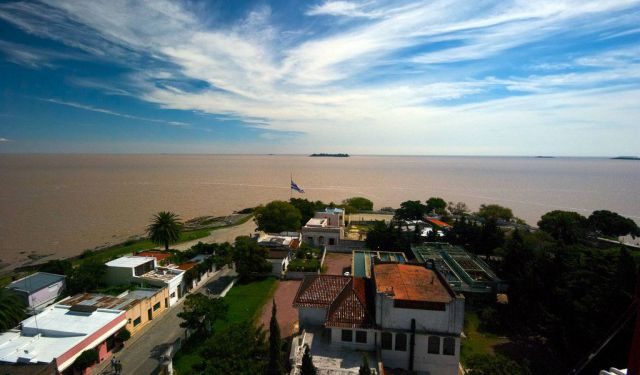 Colonia del Sacramento is the capital of the province of Colonia in southern Uruguay, which shares a common history with its larger neighbors but it has a distinctive character of its own. It is a port city with important connections with Buenos Aires in Argentina and its main attraction lies in being so close to B.A. and yet being so very different. It is a major tourist destination because it has a UNESCO designated historic area..
Image Courtesy of Wikimedia and Kevin Jones.
This article is featured in the app "GPSmyCity: Walks in 1K+ Cities" on iTunes App Store and Google Play. You can download the app to your mobile device to read the article offline and create a self-guided walking tour to visit the attractions featured in this article. The app turns your mobile device into a personal tour guide and it works offline, so no data plan is needed when traveling abroad.

1) Lighthouse and convent of San Francisco

The lighthouse is not particularly tall. It is not even right over the water. It is actually built on part of the ruins of the convent of San Francisco which was built in 1694 and destroyed by a fire ten years later, never to be replaced. The climb is worth it because the parapet gives a good all-round view of the historic center and of the cape on which the city was built. On a clear day, you may just be able to make out the tall towers of the Puerto Madero and Catalinas districts in Buenos Aires. It is certainly also the spot to view the ocean-going shipping moving up and down the Paraná river channel. The ocean-going ships are taking grain and cars from Argentina, wood, meat products and leather from Uruguay, iron ore from Brazil and Bolivia, from the very heart of South America to ports all over the world. The lighthouse itself was built by the soldiers of the occupying garrison between wars with neighboring countries, between 1845 and 1857.
Image Courtesy of Liam Quinn.
2

The historic city center of Colonia del Sacramento carries a UNESCO Patrimony of Mankind designation. It was built and occupied by both the Spanish and Portuguese colonizers at different times between 1640 and 1823. This area of the colonies was a supply source, of food, grains, oil, olives, wines and wood, to the more economically important areas of mineral extraction in the north and west of the continent. Colonia became important strategically to both the Spaniards and the Portuguese as Buenos Aires grew in importance as a supply port. The Spanish-built fortifications are smaller than those found in the north of the continent, in Colombia or Panama or in the Caribbean but they are carefully restored and maintained so that the feel of a fortified colonial out-post is very tangible. To reach the old city, turn left out of the port entrance or cross the Av. Roosevelt from the bus station into Calle Florida. A gentle walk of five blocks ends abruptly in three steps down to a path running along the ditch outside of the fortified wall of the Bastión de San Miguel. Turn right on the path to double back onto the Portón del Campo, the original city gate which was restored in 1971. Walk over the draw.bridge and under the gate and, once inside, look back and imagine how it must have felt to have to close oneself inside the city every night. You can also walk through an arcade of shops into a pleasant patio in front of the gate. Once inside the wall, you can trace it down to the river´s edge and view the old cannons aimed at enemies off-shore and on land. The occupiers did not only have to deal with the other colonizing power but also with the local indigenous tribes and later, from 1810, with Artigas and his freedom fighters who were trying to establish an independent republic.
3

The Calle de los Suspiros is maybe the prettiest of the cobbled streets off the historic city center. It runs off the Plaza Mayor. The buildings in this street and in the street that runs across it are mostly Portuguese built, of granite stone. The houses with brick or stucco walls were built by the Spanish colonizers. The streets are paved with the same stone. It comes from quarries along the coast, such as Conchillas further up the coast and from the islands off shore which were used in even the recent past as prisons where the prisoners were used to break and collect the stones. Most of the cobbled streets in Buenos Aires were supplied from this source. These very old houses are remarkably well designed for the climate. The thick walls keep them warm in winter and cool in summer. Many of the old houses in the historic center have been converted to boutique shops and cafés but Calle de los Suspiros is most residential. There is also a Portuguese museum in one of the old Portuguese built houses.
4

Behind the city gate, the cobbled streets open into a space known as the Plaza Mayor. This was originally built by the Portuguese colonizers as an area for military maneuvers and as a market-place for the sale of slaves. The square has gradually been converted over the years to a central reservation planted with mature trees which gives a peaceful and restful space for sitting in the shade. Around the square there are numerous small hotels, bed and breakfast houses and posadas as well as restaurants and cafés. A second square, directly connected to the Plaza Mayor, is Plaza de las Armas which is almost totally covered in tables with umbrellas for outdoors eating. All the streets in the historic center are cobbled with granite stone, much of which was extracted by prisoners kept on the islands out in the river. For those who get tired of walking, there are places all over the city which hire electric carts, bicycles and other forms of slow-speed transport suitable for these roads.
5

After visiting the light-house, double back across the Plaza mayor to the Plaza de la Armas square and visit the Basílica del Santismo Sacramento, from which the city gets its name. This was built originally in 1680 and was bombed to the ground in 1777 during one of the numerous interchanges between the two colonial powers. It was rebuilt in its present form by the Portuguese and inaugurated in 1810. Unfortunately, the Portuguese colonizers used the crypt as a munitions store, so the church was blown apart in 1823 when a lightening ray hit the building. Darwin on his journey to the Galapagos islands in the Beagle in 1831 comments in his diaries about the ruinous state of the church in Colonia. It was finally restored in its present form on 1836. The very thick walls keep the church nave cool in the warmest days of summer and also show the changes to the building from both periods of colonization; the Spaniards built in brick whilst the Portuguese built in stone. After visiting the Basílica, enjoy a walk around the cobbled streets of the old city where there are many antique and arts and crafts shops.
6

The Colonia yatch club and basin is an attractive location with a pleasant view out across the estuary and to the islands. It can be reached by walking around the front or by crossing the main General Flores high street from which it can be seen. By many standards, it is a small club but it is clean, pleasant and quiet. The club house has a very nice restaurant with an open air area for tables with umbrellas. Many of the yachts are Argentinean, belonging to people to sail across the Rio de la Plata estuary for an afternoon out or for the weekend. The original dock was much longer and was originally used for all purposes. The only non-recreational users nowadays are the local coast guard and police. The dock was replaced about ten years ago. It is a favorite hang-out for local fishermen. If you want to see what they could be catching, the aquarium on nearby Virrey Cevallos 236 with Rivadavia shows 38 different types of local river fish. The dock is also a quiet restful place just to sit in the sun to watch the coming and going of the boats and the view the white sand beaches up the river coast line.