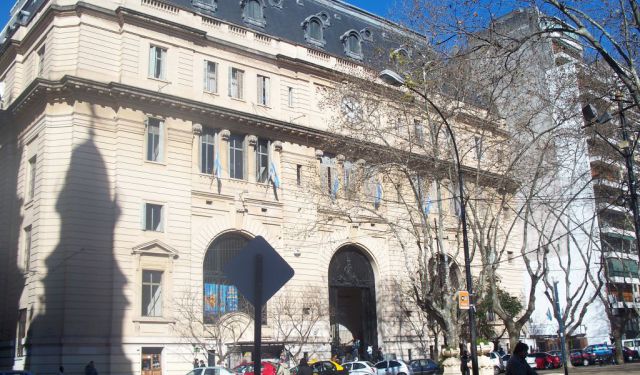 Rosario’s downtown district offers travelers an interesting journey through its mysterious past Enjoy this self-guided walking tour through the city’s most emblematic landmarks. Don’t forget to stop by and do some shopping as you make your way through the famous shopping walkway “Peatonal Cordoba.” This is a perfect tour for all ages that offers fun for the entire family.
This article is featured in the app "GPSmyCity: Walks in 1K+ Cities" on iTunes App Store and Google Play. You can download the app to your mobile device to read the article offline and create a self-guided walking tour to visit the attractions featured in this article. The app turns your mobile device into a personal tour guide and it works offline, so no data plan is needed when traveling abroad.

Located at the corner of Primero de Mayo and Cordoba, stands the mansion known as Palacio Vasallo . The building was constructed in 1911 by Alejo Infante for the infamous Doctor and philanthropist Bartolomé Vasallo. Having had no children, after his death in 1945, Dr. Vasallo bequeathed the mansion along with all the artwork housed within to the city of Rosario. On May 18th 1951 it became the permanent domicile for city council meetings. Rosario’s city council is composed of eighteen representatives who actively work and participate in nine different committees. Visitors are allowed inside the main hall if committees are not in session. The best time to visit the hall is in the afternoon or during siesta hours.
Image by Pablo David Flores under Creative Commons License.
2

Nestled between the Cathedral and the Palacio de Leones, the city’s municipal palace, lies Pasaje Juramento (the Corridor Plegde of Allegiance). The corridor joins the infamous Plaza 25 de Mayo and the National Flag Monument. Visitors can take the passage leading to the tomb of the Unknown Soldier represented by the ever burning flame; to the staircase joining the Flag Monument. The walkway contains sculptures by Lola Mora an artist from Tucuman. This is an ideal landmark to visit either during the day or at night when both fountains on either side of the corridor become illuminated with colorful lights. There are plenty of rumors shrouding the landmark since it was originally planned by Angel Guido a well-known architect and freemason. Apparently, Illuminati and freemason symbols can be easily found all throughout the structure.
3

The oldest and most beautiful church in Rosario can be found on the corner of Cordoba and Buenos Aires, two of the busiest streets in the downtown area. No expense was spared in its edification; visitors are greeted by a magnificent entrance elaborated from marble. Inside can be found the main ceremonial altar sculpted in marble imported from Italy. The left side of the building houses a small modest chapel. There is also a lower level which contains a secluded ceremonial alter. Some speculate that although the church’s main entrance is on Buenos Aires, there is a separate secret entrance that mysteriously lands at Cordoba 666. The church operates daily from 8am to 9m. Even though the main door may be closed visitors can gain access through the chapel side entrance.
Image by Leandro Kibisz under Creative Commons License.
4

On the corner of Buenos Aires and Santa Fe resides Rosario’s executive branch, inside the Palacio de Leones, also known as the Municipal Palace. The landmark received its name from the two large lion statues located at the main entrance which are exact replicas of the lions at the church of San Lorenzo in Genova, Italy. The Municipal Palace was also the former home of the city council prior to its relocation to the Vasallo Mansion, in 1951. It was constructed by architect G. Rezzara and inaugurated in 1898. Apparently, there exists evidence that the location is haunted. In June of 2011, local news media reported that a city inspector was startled by a ghostly apparition of a woman claiming to be Yolanda while using the restroom inside the building. Visitors are allowed into the foyer. Restrooms are located past the court yard on the right-hand side toward the end of the hallway. Hours of operations are from 8 a.m. to 6 pm. Monday through Friday. The building is closed on weekends and holidays.
5

Across the street from the Municipal Palace and Pasaje Juramento stands the infamous Plaza 25 de Mayo. Its name stems from the date 25 of May, a date that stands for liberation and independence in Argentina. It is also known as La Plaze de las Madres, the Plaza of the Mothers. Since the last dictatorship the mothers of the victims walk around the center structure in protest. Through the years, the plaza has continued to be a focal point for social protests. More recently, Occupy Rosario similar to Occupy Wall Street set up a peaceful camp at the Plaza in protest of social inequality and the housing crisis. The camp lasted 126 consecutive days, much like Occupy Wall Street it ended with government violence. Nevertheless, the movement was instrumental in shedding light on a serious social crisis. With its two water fountains and captivating sculptures, this is a great place to take in the city or enjoy lunch at. If you want to see the mothers march around the plaza visit the park on a Thursday between 5 p.m. and 7 p.m.
6

Rosario’s main post office is located inside one of the city’s historic buildings called the Palacio de Correos. This landmark like others in the surrounding area remains riddled with rumors and mystery. Apparently, the original construction project “La Torre Guido” was never completed because the Church which stands kitty-corner to the building did not approve of being shrouded by a taller structure. The building is divided into two parts; the side facing Cordoba functions as the city’s central post office and museum while the side facing Buenos Aires street houses city offices. Visitors have access to the building during normal working hours, Monday to Friday from 8 a.m. to 6 p.m. and Saturdays from 8 a.m. to 12 p.m.
7

This rectangular building with a name as peculiar as its appearance was built in 1907; it was the first six-story building, at the time. No one is quite sure how the building gained its name La Bola de Nieve, which translates to Snow Ball. The narrow unique building was designed by French architect Edward Le Monnier. Today, the building is privately owned and functions as a corner convenience store. Fortunately, the city’s patrimony law will ensure that the building stays in its original form for years to come. Its unique appearance is a must-see for those aficionados of eclectic architecture.
Image by Laura Valerga under Creative Commons License.
8

Peatonal Cordoba is a shopping walkway where locals go to buy. The walkway begins at La Prida and Cordoba and extends to Cordoba and Paraguay. Hundreds of shopping galleries and stores line the corridor on both sides. During the day, the walkway is busiest, between 10 a.m. and 7 p.m. depending on the season. Stores extend their hours of operation for Christmas season. In addition to stores and minute malls, you will find historic buildings like the Jockey Club located at Maipu and Cordoba as well as La Bolsa de Comercio situated at the corner of Cordoba and Corrientes. If you want to enjoy a bit of local food while shopping, walk to San Martin and Cordoba where the two major walkways meet and choose from a variety of small restaurants or cafes.
Image by Pablo D. Flores under Creative Commons License.