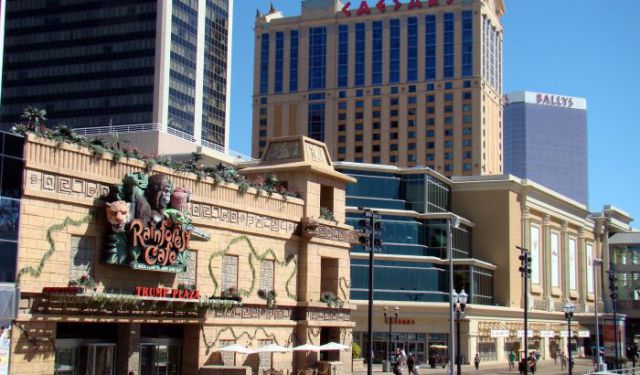 Atlantic City is steeped in history. It is home to the world’s first Boardwalk, the place where Salt Water Taffy was invented, the original home of the Miss America pageant and the setting for Charles Darrow’s Monopoly game. Another Atlantic City icon, Mr. Peanut, was "born" in 1930 as the mascot for the Planters Peanut store across from Steel Pier. Steel Pier itself, once a world-renowned destination, was famed for the Diving Horse Show.
Image Courtesy of Melody Moser.
This article is featured in the app "GPSmyCity: Walks in 1K+ Cities" on iTunes App Store and Google Play. You can download the app to your mobile device to read the article offline and create a self-guided walking tour to visit the attractions featured in this article. The app turns your mobile device into a personal tour guide and it works offline, so no data plan is needed when traveling abroad.

Create Your Own Self-Guided Walks in Atlantic City
Guide Name: Historic Atlantic City
Guide Location: USA » Atlantic City
Guide Type: Self-guided Walking Tour (Article (A))
# of Attractions: 9
Tour Duration: 3.0 Hour(s)
Travel Distance: 5.4 Km or 3.4 Miles
Author: Melody Moser
Author Bio: Melody is a freelance writer who writes for local, national and international publications. She has lived at the Jersey Shore for most of her life, and while her travels have taken her throughout Europe, the Middle East, North America and parts of Africa and Asia, she always returns to the powdery beaches and peaceful Pine Barrens of South Jersey.
Author Website: http://www.journeysnearandfarblog.com
Sight(s) Featured in This Guide:
1

People have taken pleasure in Atlantic City’s fresh sea air since the Lenni-Lenape tribe first discovered the area’s benefits many years ago. When Atlantic City's Boardwalk was built in 1870, a stroll along this new ‘footpath’ became all the rage. Stretching all the way from the Absecon Channel on the north edge of town into Ventnor to the south, the world-famous Atlantic City Boardwalk is lined with dining, nightlife, kitschy shops and all sorts of fun family attractions. On this miles-long deck, you’ll find some of the poshest hotel-casinos in the world, including Trump Taj Mahal and Caesars Atlantic City. Come with an appetite -- you’ll want to nosh on pizza, Salt Water Taffy and other Boardwalk staples as you walk.
2

Since it was completed in 1929, Boardwalk Hall has featured performances by numerous well-known artists including Elton John, Paul McCartney and Bruce Springsteen, among others, as well as exciting circus performances and the enchanting Disney on Ice. It’s also the original home of Atlantic City’s famed Miss America pageant. One thing many visitors aren’t aware of is that Boardwalk Hall houses two magnificent organs. The world’s biggest pipe organ, with 33,000 pipes, is located in the Main Auditorium. Weighing approximately 150 tons, the organ was built by Midmer-Losh Organ Company between 1929 and 1932. In the Ballroom you’ll find the renowned theater-type organ, which was completed in 1929 by W.W. Kimball of Chicago. This organ was the source of inspiration for the famed organ at Radio City Music Hall in New York City.
3

This tiny, unassuming little sub shop has been popular with locals since World War II. Filled with character and steeped in history, each day the shop brings in numerous three-foot-long sandwich rolls, baked fresh across the street at Formica Brothers Bakery. Inside, the walls are lined with photos of celebrities who have dined here, from Sinatra to Mick Jagger. Many have inscriptions praising the excellence of the cuisine. Everyone raves over the White House Special; also popular is the Cheese Steak Sub. Opened by Anthony Basile and Alfred “Fritz” Sacco in 1946, the shop has been family-owned for more than 60 years. Expect to wait in line, but it will be worth it.
4

If you've never had this sticky treat, don't let its name scare you away. This mouth-watering candy has no salt water in it. There's not much water at all, actually. So where did its name come from? Legend has it that in 1880 a candy merchant named David Bradley arrived at work one morning to see that the ocean has swamped his beachside candy stand. Later on that day when a mom and her young child came to ask for some taffy, Bradley replied, in frustration, “You mean ‘salt water’ taffy, don’t you?” The child’s mom overheard, and suggested that might be a great name for his new candy. “But would anyone want to buy taffy soaked in salt water?” Bradley asked. “Perhaps,” the woman suggested, “you could use fresh water, and just a bit of salt.” The name for this chewy treat stuck and today, Salt Water Taffy can be found in an array of mind-boggling flavors, including Buttered Popcorn, Chocolate Chip Cookie, and Caramel Corn.

Stop at James' Salt Water Taffy in the Pier Shops at Caesars to get a stick -- or box -- of this delectable treat. Confectioner Enoch James claims that he and his sons have been making Salt Water Taffy since before they introduced it on the Atlantic City Boardwalk in the 1880's. You'll find the shop on the right side of the Pier's Boardwalk level, down at the far end.

This small but compelling memorial to those who served in the Korean War was created to ensure that future generations remember veterans of the Korean War, their dedicated service, the legacy they continued, and the freedom they preserved. The memorial, situated in Brighton Park where Park Place and the Boardwalk meet, is free to visit and open daily.
6

In its heyday, the world-famous Steel Pier entertained as many as 80,000 people in one day with non-stop performances by top-name entertainment and fantastic novelty acts, such as a daring high-wire motorcycle act. The Pier had four theaters which could accommodate 12,000 people at a time. Steel Pier was also the home of the world-renowned High Diving Horse show.

Opened in 1898, the Pier was the place for everyone who was anyone to perform. In 1925, George Hamid, a former tumbler with the Buffalo Bill Circus, joined the Pier’s owners (he later bought the Pier) to create and launch the spectacles that became legend, including the Human Cannonball and the Diving Horse spectacular.

From the 1920s through the 1950s visitors could see entertainers such as W.C. Fields, Guy Lombardo, Mae West, Charlie Chaplin, and Jimmy Dorsey, among others. Visitors, for one admission price, could enjoy every concert, film and attraction on the Pier.

A devastating fire destroyed the Pier in 1982, but it was fully renovated in 1993 as an amusement pier. Although it no longer holds the charm of yesteryear, it's worth a visit. Take a stroll during a quiet moment and you may be able to imagine the hush of the crowd as a horse, some 40 feet above with a woman on its back, slides down the ramp, and plunges into the deep tank below.

Introduced to Atlantic City in the late 1880s, rolling chairs were a luxurious way to take a scenic tour of the Boardwalk. Today, the rolling chairs are still here, and they are a fun, nostalgic way to travel from one casino to another as well as a good alternative to walking. The chairs are topped by a canopy that shields riders from the blazing sun on hot summer days, and can be found anywhere along the Boardwalk, especially at the entrances to the casinos and the Pier at Caesars. The chairs operate year-round, and you pay by the block. Be sure to count the blocks to make certain you are charged correctly. And a tip to the driver is always appreciated.

At the end of this walking tour flag a rolling chair down at the Boardwalk entrance to Showboat Casino if you'd prefer to ride back to your car at Caesars rather than walk. Or walk one block to Pacific Avenue and hop on a Jitney.
8

At the free Atlantic City Historical Museum you can learn about the history of this one-of-a-kind resort. You’ll see artifacts from Atlantic City’s heyday as well as photographs, costumes and postcards. Learn about the timeless American institution, the Miss America Pageant, held in Atlantic City from 1921 to 2004. Make sure you catch the entertaining historical video "Boardwalk Ballyhoo: The Magic of Atlantic City", shown continuously throughout the day. Pick up a copy of the video and other books and Atlantic City memorabilia at the small gift shop by the register.
9

Absecon Lighthouse is not only the tallest lighthouse in New Jersey, but the third tallest in America, towering 171 feet above Atlantic City’s north end. It's also the oldest lighthouse in the country, being built in 1857. It costs a small fee to climb the 228 knee-trembling steps to the top of the 150-year-old lighthouse, but it’s free to look around the Keeper’s House Museum, exhibits and grounds. The climb up is well worth it, though, as you’ll be rewarded with breathtaking views. You’ll also get to check out the original first-order Fresnel Lens, first lit in 1857.
Image Courtesy of Shannon McGee.