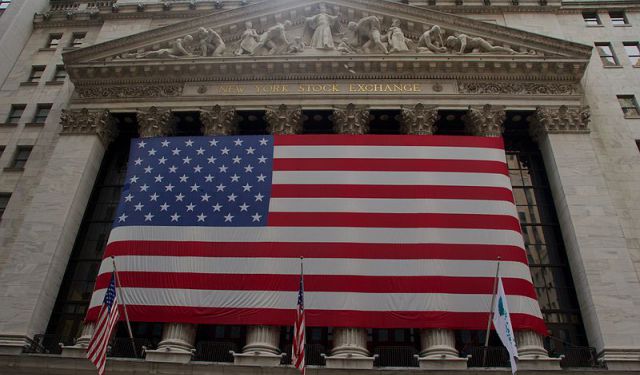 When most people think of American history, they think of Philly, Boston, and Washington D.C. But NYC is chock full of history dating back to the late 1600s. On this tour we'll see where George Washington was inaugurated, where the patriots protested British rule, the first U.S. capitol building, and to commemorate more recent times, Ground Zero. Stroll around the Financial District and discover something you didn’t learn in history class.
This article is featured in the app "GPSmyCity: Walks in 1K+ Cities" on iTunes App Store and Google Play. You can download the app to your mobile device to read the article offline and create a self-guided walking tour to visit the attractions featured in this article. The app turns your mobile device into a personal tour guide and it works offline, so no data plan is needed when traveling abroad.

Create Your Own Self-Guided Walks in New York
Guide Name: Historic Financial District
Guide Location: USA » New York
Guide Type: Self-guided Walking Tour (Article (A))
# of Attractions: 8
Tour Duration: 2.0 Hour(s)
Travel Distance: 2.3 Km or 1.4 Miles
Author: Rachel Khona
Author Bio: Hailing from a magical land called New Jersey, Rachel (nee Reshma) is a writer and performer living in Brooklyn. She has written for Vaga, Treats, and Fashion Indie. She is currently working on her memoir, Confessions of a Dot Head, about being raised by a conservative Indian family, swindling European cab drivers, and making out in bathrooms. When not writing, she can be seen performing some of her work around New York.
Author Website: http://www.rachelkhona.com
Sight(s) Featured in This Guide:
1

Although the term "Ground Zero" can be used to describe any point where a bomb went off and the area is severely damaged, after the World Trade Center Attacks on September 11, 2001, the term was indelibly linked to the terrorist attack by Al-Qaeda. Before being destroyed by the assaults, the World Trade Center was composed of seven buildings including the Twin Towers, known as the North and South Tower. The concept for the World Trade Center dates back to 1946 and was not fully complete with all seven buildings until the late 1980s. It was originally conceived to bring some of the city’s business involved in the financial sector away from Midtown and to lower Manhattan.

Even though planes were only flown into the Twin Towers, the other surrounding buildings had to be demolished as they were severely damaged. The cleanup took eight months finishing in 2002. After much controversy and debate about the design, rebuilding started in 2006. The plan involves the construction of a “Freedom Tower”, the National September 11 Memorial and Museum, and five other towers.

Interestingly enough, over the summer of 2010, Ground Zero workers found the remains of an old shipwreck, stemming from the fact that much of the shoreline of Lower Manhattan was extended in the 18th and 19th centuries.

This historic church was originally built in 1698 in the Gothic Revival style. During the Revolutionary War, New York became the base for British military operations. Under occupation the clergy was required to become loyalists, though some of the parishioners were in fact patriots. Unfortunately, the Great Fire of 1776 burnt the church down. The New York State legislature ratified the church charter, not requiring anyone to be loyal to Britain. Reconstruction started in 1788 and was completed in 1790. After the Patriots won the war, Washington returned following his inauguration at Federal Hall for service at St.Paul’s Chapel, a parish of Trinity Church. However due to a weakening structure, the church was torn down in 1839 and was rebuilt in 1846. At the cemetery you can see the grave of Alexander Hamilton, the First Secretary of the Treasury, who was killed in a duel with Aaron Burr, the third Vice President.
Image by Gryffindor under Creative Commons License.
3

Opened in 1792, this is where it all started when a group of stock traders signed an agreement under a tree. The New York Stock Exchange is now the biggest stock exchange in the world, with average daily trading amounting to over $150 billion. The first exchange was located in one room at 40 Wall Street, until it was destroyed by the Great Fire. As business and wealth grew, the exchange kept moving into larger buildings, until it came to its current incarnation in 1903. The building, which was built in Neoclassical style, has seen its share of historic events from the 1920 bombing which killed 33 people to the Black Thursday Crash of 1929 leading to the Great Depression, the 1987 crash, and the 2010 Flash Crash, in which the market crashed and rebounded minutes later. The NYSE was also the site of activist Abbie Hoffman’s infamous stunt in which he threw fistfuls of U.S. currency onto the trading floor as a protest against corporate America. In 2000, the band Rage Against the Machine was escorted out when they attempted to gain access to the trading floor to film a music video directed by Michal Moore.
Image by Ciar under Creative Commons License.
4

Built in 1700, Federal Hall served as the first capitol building in the U.S. the site of ratification for the Bill of Rights, where America’s first congressional session was held, and the place where George Washington was inaugurated. The colonists also met here to discuss one of their first acts of rebellion against the British government, protesting the Stamp Act, which required printed materials to be printed in London and possess a revenue stamp. After the capitol was moved to Philadelphia, the building served as the seat of government for New York City. The building was demolished in 1842 and in its place is the New York Customs House, one of the best surviving examples of classical architecture. Now a statue of George Washington stands outside to commemorate his inauguration here.
Image by Alistair McMillan under Creative Commons License.
5

This public park is home to 1 Hanover Square which has been known by many names including the New York Cotton Exchange, and the India House. The New York Cotton Exchange was established in 1870 and was one of the first commodities markets in the U.S. In 1914, it became the India House, a private members only club for those in the upper echelons of business. Hanover Square is bordered by Stone Street which is now a cobblestone pedestrian only walkway. A memorial for British citizens killed on 9/11 also sits here. And it was used for filming in the movie Kate and Leopold.
Image by dmadeo under Creative Commons License.
6

This tavern dating back to 1762 was purchased by Samuel Fraunces as a residence, however it quickly became known for more than that. The tavern served as a meeting place for the Sons of Liberty, a political group of American patriots. After the revolution when New York was the capitol for a brief period, the building housed the Department of Treasury and War. But Fraunces Tavern might be best known as the site of George Washington’s farewell address to his officers. But before that during the American Revolution, Today the tavern is a museum dedicated to colonial life and the tavern’s historical significance.
Image by Leonard J. DeFrancisci under Creative Commons License.
7

Bowling Green Park originally served as a cattle market in the mid 1600’s until a portion of it was converted to a park almost a century later. Ironically today, it serves as a home to the Charging Bull, a bronze sculpture built after the stock market crash of 1987 as a symbol of the strength of the American economy. A “bull” market refers to an upward moving economy and increased investor confidence, hence the choice of a bull. The artist Arturo Di Modica brought it himself to the New York Stock Exchange until police seized it. Fortunately for Di Modica, the public furor led the New York Department of Parks and Recreation to Bowling Green, where it still resides with a temporary city permit over 20 years later.
Image by Beyond My Ken under Creative Commons License.
8

Located at the southernmost tip of Manhattan, Battery Park was the beginning of the Dutch settlement in New York. As immigrants began to come in waves it served as the arrival point thousands of immigrants arriving in NYC before Ellis Island. From the park you can get stunning views of the river and the Statue of Liberty. Castle Clinton which sits at the south end of the island, was a fort until the U.S. Army stopped using it in 1821. Since then it has been used as a concert hall and theater, and then in the mid-1800’s as an immigration processing facility. It later became an aquarium until that was shut down in 1941. It now is a National Monument.
Image by Nicolas FERELLEC under Creative Commons License.