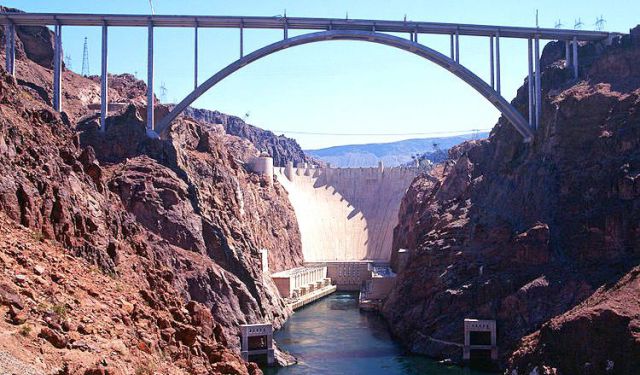 Hoover Dam is the 8th Great Wonder of the world. It was built during the Great Depression and over 200 men lost their lives working on it. Learn how this magnificent engineering marvel not only tamed the wildest river in the United States, but also gave seven western states a new lease for economic prosperity.
This article is featured in the app "GPSmyCity: Walks in 1K+ Cities" on iTunes App Store and Google Play. You can download the app to your mobile device to read the article offline and create a self-guided walking tour to visit the attractions featured in this article. The app turns your mobile device into a personal tour guide and it works offline, so no data plan is needed when traveling abroad.

If you’ve never been to Hoover Dam, I’m sure your first glimpse of the 8th wonder of the world is a mixture of shock and awe. Every time I visit, I shake my head in disbelief and say, “How’d they do that?”

Hi, my name is Scott and I’ll be your guide today as we explore Hoover Dam.

Our tour begins on the Nevada side of the dam and will cover the sites visible from the top of the dam. I hope you are either looking out from the parking garage or have descended to the street. Either place is fine.

Before we get going, let me give you a general overview of the dam so when we get to specific sights it will be easier to understand their function.

Construction on the dam began in the spring of 1931 and was completed in 1935. The dam is 726 feet tall. The crest or top of the dam is 1,244 across and 45 feet wide. Although the dam appears to be this enormous, concrete wedge jammed between the canyon walls, it’s really more like a pyramid and one side has a beautiful concave face. The base of the dam is 660 feet thick; almost as wide at the bottom as it is tall.

On the first leg of the tour we’ll explore the monuments and dedications before moving onto the dam itself. The most modern piece of artwork on the dam is this statue of the high scaler. High scalers were used at the beginning of the Dam’s construction. The first order of business was to clear the canyon walls of rock debris so the edge of the dam could form a seamless fit. Dangling from ropes like spiders on a string, these high scalers danced across the canyon walls using jackhammers and dynamite to clear the rock. Because high scaling was the most dramatic of jobs, it was an obvious choice to personify the more than twenty-one thousand men who built the dam. The statue was designed by a local sculptor named, Steven Liguori, and was commissioned by several of the concessionaires.
3

3) Winged Figures of the Republic

Oskar Hansen designed most of the statues and dedication pieces around the Dam. His major accomplishment is this plaza on the Nevada side of the dam. Here we see two winged figures flanking a 142-foot high flagpole. Hansen named these two bronze statues the “Winged Figures of the Republic.” They are 30 feet high, their shells are five-eighths of an inch thick, and each one weighs two tons. Rubbing the feet of the statues is supposed to bring good luck. With Las Vegas so close, it can’t hurt. Surrounding the base of the Winged Figures and the flag is a terrazzo floor with an inlaid map of the cosmos to represent the day President Roosevelt dedicated the dam.

When it came time to place the huge marble base for the statues and flagpole, they didn’t want to mar the celestial map, so they set the base on large sheets of ice and slid them into place. When the ice melted, voila, the job was done.

At the street entrance to this plaza are emblems of the seven Western States that share the Colorado River.
4

To the right of the Winged Figures is an elevated compass with the signs of the zodiac surrounding it. Apparently, astronomy and astrology had an influence on how the builders wanted their legacy to be viewed.

Oskar Hansen also designed the plaque commemorating the 96 men who died during the construction of the dam. Over twenty-one thousand men worked on the dam and at the peak, five thousand, two hundred men were on the payroll. Construction went on 24 hours a day, seven days a week. There are conflicting reports of how many men really died. We do know 46 men died from carbon monoxide poisoning brought on by use of gasoline-fueled vehicles used in the diversion tunnels. The management company listed the cause of their deaths as pneumonia to avoid paying compensation claims. Suffice it to say; roughly 200 men lost their lives while working on this project. As the inscription reads, “They died to make the desert bloom.”
5

Up until Hoover Dam was constructed, the Colorado River wrecked havoc on California’s Imperial Valley and the annual flooding made it impossible to farm. The Federal Government realized some kind of control was needed to harness this great resource and make sustainable farming a reality. When it was announced that the government was planning to build a dam, every state in the southwest wanted a piece of the river – even Mexico.

In December of 1928, President Coolidge signed a bill authorizing $165 million dollars for Hoover Dam, Imperial Dam, and the All-American Canal.

The first step was to divert the river. Four diversion tunnels, each 56 feet in diameter, and each three quarter of a mile long were cut through solid rock. Once the tunnels were built and the river was diverted, the canyon was excavated down to bedrock. Two years after construction began, it was time to pour the first bucket of concrete. It took two more years to build the dam. The project was completed two years ahead of schedule and seven million dollars under budget. President Franklin Roosevelt dedicated the dam on September 30. 1935.
Image by Arz1969 under Creative Commons License.
6

The dam’s primary goal was to control the Colorado River, but engineers knew it could also be used to create electricity, so they added these intake towers to direct water from the lake to the power plant at the base of the dam.

The intake towers let water into a 30-foot wide pipe. When it reaches the generators below, it’s moving at a speed of 85 mph. The water hits fan-like fins, much like the waterwheels of old, which turn the generators and create electricity. The water is then discharged into the river where it flows to the next dam downstream to be used once again.

At peak use, enough water runs through the generators to fill 15 swimming pools every second.
7

Due to the terrorist attack on the World Trade Towers, new security protocols were put into place. It was also time to remedy another nagging problem - traffic. Given that this is the only route into Arizona until you get to Laughlin, something needed to be done. The Callaghan-Tillman Memorial Bridge began in January of 2005 and will be open in late 2010. The bridge is a marvel too. It’s 1900 feet long, stands 900 feet above the canyon floor, and costs 144 million dollars. Seventeen thousand cars and trucks are expected to use the bridge daily.
8

Looking down the face of the dam, that horseshoe shaped building at the bottom is where electricity is produced. There are 8 generators on the Nevada side and 9 on the Arizona side. Each generator weighs 4 million pounds and when working in concert, they produce over 1,345 megawatts, or enough electricity to supply a city of 750,000 people.

After the dam was completed, it took an additional 7 months to install some of the powerhouse equipment and 18 months for the lake to rise high enough to generate electricity.

Towards the end of 1936 the first three generators began operating. More generators were put on line as quickly as possible and in 1961 the last generator was installed.
9

Opposite the Arizona tower, is a bas-relief mural done by Oskar Hansen. It was fashioned in concrete and was designed to pay homage to the Indian tribes who have lived with the Colorado River since distant times. The inscription reads, “Since primordial times, American Indian tribes and Nations lifted their hands to the Great Spirit from these ranges and plains. We now with them in peace buildeth again a Nation.”

Oskar Hansen also designed the five-panel mural on the Nevada side of the dam. The panels illustrate the benefits of Hoover Dam: flood control, navigation, irrigation, water storage, and power.
10

The dam has two spillways; one on each side. In the event the lake rises faster than water can be run through the generators, the spillways come into play. They’ve only been used twice. Once in 1941, to test for defects, and once again in 1983 when abnormal rainfall caused the lake to rise too quickly. Once the water enters the spillway, it goes into a tunnel 50 feet wide, drops 700 feet, and connects to the original diversion tunnels before it’s discharged into the river downstream. Each spillway can handle the same amount of water that goes over Niagara Falls.