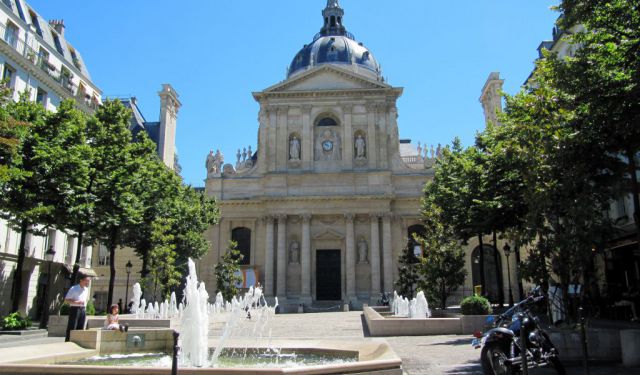 One of the intellectual capitals of the world, Paris has long been a center for writers of all nationalities. From American Ernest Hemingway to Irishman James Joyce, expatriates have flocked to the city for inspiration. At the same time, the French literary tradition has thrived. Follow in the footsteps of literary giants on this tour of Literary Paris, as we find the favorite haunts of writers, past and present.
This article is featured in the app "GPSmyCity: Walks in 1K+ Cities" on iTunes App Store and Google Play. You can download the app to your mobile device to read the article offline and create a self-guided walking tour to visit the attractions featured in this article. The app turns your mobile device into a personal tour guide and it works offline, so no data plan is needed when traveling abroad.

Create Your Own Self-Guided Walks in Paris
Guide Name: Literary Paris
Guide Location: France » Paris
Guide Type: Self-guided Walking Tour (Article (A))
# of Attractions: 8
Tour Duration: 1.0 Hour(s)
Travel Distance: 3.7 Km or 2.3 Miles
Author: Rachel Dale
Author Bio: Rachel Dale has lived in Paris for over two years. She has written for numerous publications, both online and print, including AOL Travel, Lucy's Luxury Adventures, and Suite101. She currently lives in the Marais, where she writes and teaches.
Sight(s) Featured in This Guide:
1

The first stop on our tour of literary Paris is the apartment of James Joyce, Irish writer. Joyce lived here during the 1920s and 1930s, during which time he wrote Ulysses, one of the great modernist masterpieces about a day in the life of Leopold Bloom, an ordinary man. Ulysses was published by Sylvia Beach, of the famous Shakespeare and Company bookshop, in 1922. While living here, Joyce finally began to become famous, receiving numerous grants that allowed him to stop teaching and concentrate on his writing. However, at the same time, he underwent numerous eye surgeries as his eyesight failed; he was never able to fully restore his sight. In 1940, the Joyces moved to Zurich, Switzerland in response to the Nazi occupation of France. Joyce died there several years later.
2

The Sorbonne, founded in 1253 as the Collège de France, is one of the oldest universities in Europe. Here, many French and foreign writers have received excellent educations, including French favorite Marguerite Duras. However, the organization of the school hasn’t always been the same. After widespread rioting against the organization of many French institutions in 1968, the Sorbonne reorganized itself into thirteen autonomous universities, loosely organized as the University of Paris system, in 1970. Each of these schools specializes in several disciplines, and only four maintain the word “Sorbonne” in their title: Paris I/Panthéon-Sorbonne; Paris III/Sorbonne Nouvelle; Paris IV/Sorbonne; and Paris V/Descartes, Faculté des Sciences Humaines et Sociales, Sorbonne. Only current students and professors are allowed inside the school, which is organized in a chaotic way, with different wings, half-floors, and staircases that never seem to be where you last saw them.
Image by Clem under Creative Commons License.
3

Visitors to Paris may be disappointed to learn that the current Shakespeare and Company, located on the Rue de la Bucherie, is not the same establishment that catered to the likes of Ernest Hemingway and F. Scott Fitzgerald. That bookshop, run by famed expatriate Sylvia Beach, moved several times and finally settled nearby, on the Rue de l’Odéon. However, the shop was forced to close in December 1941, reportedly after Beach refused to sell her last copy of James Joyce’s Finnegan’s Wake to an occupying Nazi officer. Fellow American George Whitman opened this store, at the present location, in 1951, and has created a literary following of his own. Throughout the 1950s, the store was visited by many famous writers of the Beat Generation, including Allen Ginsberg and William S. Burroughs. Today, the store keeps rooms for traveling writers, allowing them to stay for free in exchange for several hours work in the bookshop.
Image by JohnPardolta under Creative Commons License.
4

Known today as “Le Relais du Vieux Paris,” this hotel had no name back in the 1950s when famed writers and poets of the Beat Generation flocked here for its low prices and proximity to Parisian literary establishments (such as Shakespeare and Company, just down the street). Allen Ginsberg and William S. Burroughs stayed here often – in fact, Burroughs completed his celebrated Naked Lunch in this location. However, the hotel was filthy and run-down, incredibly different from the upscale hotel that it has turned into. Ironically, this area is now one of the most expensive in Paris. A plaque near the door commemorates the famous authors who once hung their hats here.
Image by Mbzt under Creative Commons License.
5

The Académie Française, housed in the Institut de France building on the Quai de Conti, was founded in 1635 by Cardinal Richelieu. The Académie is charged with preserving the purity of the French language – a difficult task these days, when Anglicisms like “week-end” and “Rock ‘n Roll” are part of every French person’s vocabulary. Not only does the Academy serve as the authority on the French language, but it also has a prestigious literary history: writers such as Alexandre Dumas (son) and Victor Hugo have been among the 40 “immortals,” as the board members are called, who serve for life. The Academy also awards some of France’s most prestigious literary prizes, including awards for general literature, novels, poetry, and philosophy. Several seats are currently vacant, including one left by noted anthropologist Claude Lévi-Strauss, who died in October of 2009.
Image by Guillaume Armantier under Creative Commons License.
6

Once known as the Hôtel D’Alsace, after the French region near Germany, L’Hôtel (which translates simply as “The Hotel”) is one of the most famous literary landmarks in Paris. Oscar Wilde died here in exile, in room sixteen, and is buried in Père Lachaise cemetery. Although his reputed last words had to do with the room’s décor (“Either this wallpaper goes or I do”), this has been contested; more likely, he actually remarked, “I am dying beyond my means,” a play on the expression to live beyond one’s means and a comment on the hotel’s prices. The hotel today remains upscale and situated in the heart of the Saint-Germain-des-Près quarter. Jorge Luis Borges, famed Argentinean writer, paid respects to his favorite writer when he lived here himself for several years in the 1970s and 1980s.
Image by Janet Swisher under Creative Commons License.
7

Around the corner from Les Deux Magots and across the street from the Brasserie Lipp, two of Ernest Hemingway’s favorite Parisian restaurants, the Café de Flore was also a literary hotspot throughout the twentieth century – and, shockingly, remains so today, despite the tourists who flock here every year. Simone de Beauvoir and Jean-Paul Sartre used to sit, writing and debating over a cup of coffee for hours. Celebrities still frequent the Flore, which has a lovely atmosphere and a discreet waitstaff. Take a moment and sit for a cup of coffee or a glass of lemonade on the terrace and watch the Parisians of Saint Germain pass by – but be sure to budget for it! A drink here will be more expensive than other neighborhood cafés, and you should allow at least ten euros for your beverage of choice.
Image by sanfamedia.com under Creative Commons License.
8

The last stop on our tour of literary Paris, the Village Voice bookstore (just around the corner from the Café de Flore) is currently one of the centers of the Anglophone literary world. In a city where English paperbacks can be had – but only at a price – the Village Voice provides a reasonably priced, nicely curated selection of bestsellers, guidebooks, classic novels, and non-fiction (which you’ll find upstairs). The bookstore also hosts readings and other events, often several times each month. You can find their event schedule on their website. Just be sure to arrive early for famous authors – a reading by David Sedaris can have audience members lining up in the streets!
Image by Mu under Creative Commons License.