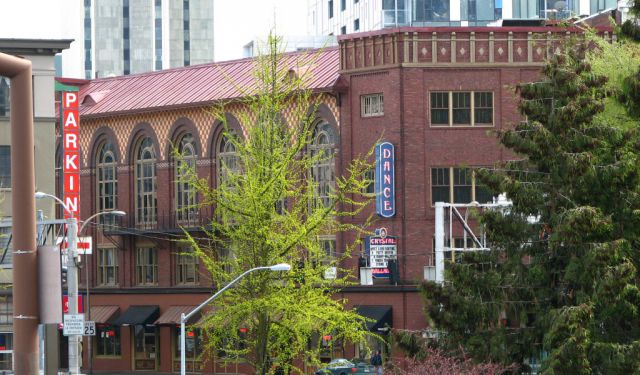 The city’s nightlife is extremely diverse, and runs the gamut of retro to laid-back to grungy to upscale. The focus tends to be on music – with a diverse blend of local musicians in a number of styles – and, of course, local microbrews. This tour highlights a number of great night spots all within an easy walk of one another.
This article is featured in the app "GPSmyCity: Walks in 1K+ Cities" on iTunes App Store and Google Play. You can download the app to your mobile device to read the article offline and create a self-guided walking tour to visit the attractions featured in this article. The app turns your mobile device into a personal tour guide and it works offline, so no data plan is needed when traveling abroad.

Create Your Own Self-Guided Walks in Portland
Guide Name: Nightlife
Guide Location: USA » Portland
Guide Type: Self-guided Walking Tour (Article (A))
# of Attractions: 5
Tour Duration: 5.0 Hour(s)
Travel Distance: 1.6 Km or 1 Miles
Author: Jim Reynoldson
Author Bio: Jim Reynoldson is an avid traveler and writer who grew up on Oregon. He enjoys hiking, camping and sightseeing throughout the Pacific Northwest and beyond.
Sight(s) Featured in This Guide:
1

One of the city’s primary music venues for better-known acts, this big-band era building has been restored and preserved by the McMenamin Brothers, including two bars and a unique floating dance floor in a ballroom straight out of the early twentieth century. Lola’s Room on the 2nd floor routinely hosts smaller scale concerts. On the ground floor, Ringler’s Pub is a laid-back place to enjoy some good food, billiards, and a wide assortment of beers, whiskeys and other spirits. This floor of the building was once a mechanic’s garage – but the interior has been transformed into a rustic, hip pub and a great place to go before or after a concert. Ringler’s Pub is named after maverick Montrose Ringler, the original owner of the Crystal Ballroom and a number of the city’s other music and dance venues in the early twentieth century in an era hostile to jazz, dancing, and alcohol consumption.
Image by M.O. Stevens under Creative Commons License.
2

Specializing in jazz and blues, Jimmy Mak’s opened in 1996 and is one of the coolest nightspots in the city, attracting a pretty diverse range of ages. A clean, classy interior, good acoustics, and an attractive lineup of local and national performers make it a popular spot for music in a city surprisingly rich in talent for its size. The music magazine Downbeat even rated Jimmy Mak’s among the 100 best jazz venues in the world. The menu theme is Greek and Middle Eastern, and very tasty. A basement lounge with pool tables and an internet jukebox is an option if the main floor is crowded, as well.
Image by Nick Taylor under Creative Commons License.
3

Dixie Tavern is a “Coyote Ugly” themed bar with a country/rock theme and scantily clad woman dancing on the bar. The tavern hosts a number of events – from karaoke every Wednesday night to UFC watching parties to bikini contests. With a dance floor, three bars and a dining area, Dixie Tavern also hosts private parties, a VIP section and some live music events. Open until 2:30 am on weekends, Dixie offers a pretty good selection of greasy, tasty bar food – including a number of Southern-themed barbecue dishes. Every Thursday is “Ladies Night” – so no cover is charged for the female patrons.
Image by Jinx McCombs under Creative Commons License.
4

Dante’s is a gritty, hip bar and music venue right in the heart of the action. In addition to a number of indie rock concerts, Dante’s also offers up burlesque shows, cabaret, dancing, and Karaoke From Hell – in which participants butcher the hits while fronting a live band. Opened in 2000 in a historic building that once housed a brothel, among other establishments over the years, Dante’s has grown to over 7500 square feet in space and appears on many of the city’s “best” lists of bars and concert halls. While it has a bit of an anarchist vibe, Dante’s is safe and a great place to watch a show.
5

Whether you visit Portland City Grill during the day or night, you’ll be treated to one of the best views in the city. This restaurant and piano bar is located on the 30th floor of the U.S. Bank building with a vista like few others from out the multitudes of windows of Mt. Hood, Mt. St. Helens, and the buildings and parks of downtown. Generally more of a lounge feel, there is typically a piano-playing vocalist and dancing. Despite the fact it can often be crowded, good and extensive food and drink menus also make the butterfly-inducing 30-story elevator ride worth the trip. Ending the tour is extremely convenient, as the U.S. Bank building is sandwiched in between 5th and 6th Avenues – the two primary downtown arteries for both the MAX light rail and Tri-Met buses heading both north and south.