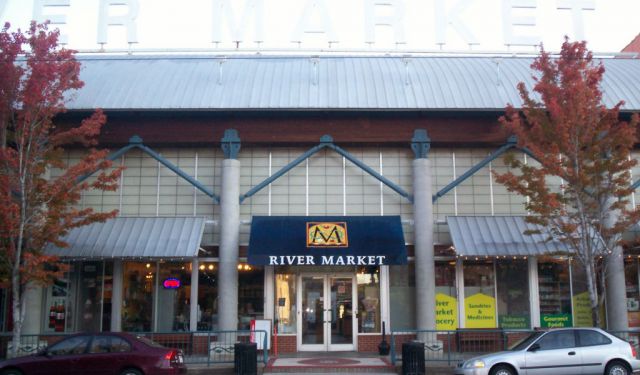 Nestled between the south bank of the Arkansas River and the busy streets of downtown Little Rock lays a hub of family entertainment. Little Rock’s River Market district was created from several blocks of dilapidated warehouses dating in construction from the 1920’s.The focus of this tour will be on sites within walking distance of Ottenheimer Hall, the centerpiece of the district. Several fascinating and fun-filled places will be featured.
This article is featured in the app "GPSmyCity: Walks in 1K+ Cities" on iTunes App Store and Google Play. You can download the app to your mobile device to read the article offline and create a self-guided walking tour to visit the attractions featured in this article. The app turns your mobile device into a personal tour guide and it works offline, so no data plan is needed when traveling abroad.

Create Your Own Self-Guided Walks in Little Rock
Guide Name: River Market Family Fun
Guide Location: USA » Little Rock
Guide Type: Self-guided Walking Tour (Article (A))
# of Attractions: 7
Tour Duration: 2.0 Hour(s)
Travel Distance: 1.8 Km or 1.1 Miles
Author: Bret Kuchar
Author Bio: I was born in Springfield, Illinois. There, I took an interest in American history, having been exposed to a strong historical influence centered on Abraham Lincoln. Often, I find myself fascinated with hearing stories and viewing local exhibits related to a city's early beginnings or famous personalities. When I came to Little Rock in 1986, I promptly visited museums and historical landmarks. I decided to begin writing about my experiences in personal and public venues.
Sight(s) Featured in This Guide:
1

The Heifer International complex is Arkansas' first Platinum LEED (Leadership in Energy and Environmental Design) certified building. Its structure sits on a rehabilitated brownfield. In its original state, the field was contaminated by leaking storage containers, industrial debris, and years of neglect. The first steps in the construction of this 94,000 square foot building was to collect and dispose of 75,000 tons or 4500 truckloads of contaminated earth. All building materials used in this project are recycled or recyclable and locally produced to reduce fossil fuel usage from shipping.

Heifer International focuses on improving the essential components of a society that leads to reducing and eliminating hunger. The organization partners with communities in 50 different countries where over 800 sponsored projects are in progress. Farming practices and livestock management are the tools used to promote the efforts of fulfilling their mission statement.

Heifer Village offers a small glimpse into the world of Heifer International. Interactive displays in its facility captures children’s' attention to educate them in the methods Heifer International uses to fight world hunger. A 20 minute guided tour of the “Green” building (the main complex) is scheduled periodically throughout the day. Visitors are allowed to view the magnificent architectural designs and innovations that lead to the center’s notable LEED rating. Amenities include a souvenir shop, cafe, and public restrooms.

The majestic Clinton Presidential Library stands amongst rolling hills and beautiful gardens alongside the Arkansas River. The Clinton Center was opened to the public on November 18, 2004. 30,000 people waited in a torrent of rain to be the first to enter its grand reception hall.

The library houses the largest collection of archives, museum pieces, and mementoes than any other center in the Presidential Library System. One can also examine such interesting exhibits as the replicas of the Oval Office and the Cabinet Room. Other features reveal an inside look into the Clinton Administration. Visitors to the site take their own self-guided tours. The admission fee is nominal compared to the incredible experience your family will enjoy.

The Clinton Library building is just one of several structures in the park. Two other buildings exist as part of this complex. The Archives Building, annexed on the library to the south and across from it, the Choctaw Station. This historic train station was converted to be the quarters for the Clinton Foundation and other public service ventures. These buildings are not open for public touring.

The park also supports a wetlands area to the northwest of the library entrance. The serene landscape lends itself to a moment of reflection and enjoyment of nature.

Upon concluding your time in the park, your next stop can save you some steps. Just in front of the library entrance is a shuttle service that will take you directly to your next tour destination. If you want to be a bit more nostalgic, The River Rail electric street car has a stop located between the Clinton library and Heifer International. Its route will take you a little past the next tour destination. A short walk will get you back on track.

The Central Arkansas Nature Center is located on a lower plateau level directly behind the Clinton Museum Store. Several points of access exist. Signs clearly mark the way. Alternative paths are also available from other directions including Ottenheimer Market Hall.

The Arkansas Game & Fish Commission operates the center. Along with housing its offices, the building is devoted to exhibits and features for the purpose of conservation and natural habitat education. The Nature Center curators recommend beginning the free tour of their exhibits by viewing a short 10 minute high definition screening in the theatre room. Up to 60 people can watch a movie on a large screen. Closed captioning for the hearing impaired is accessible. The film features information on how the Arkansas Game & Fish Commission assists in the conservation efforts of the state’s floral and fauna.

Following this short presentation, visitors can look at a number of interesting natural displays. The featured exhibit is a segmented living habitat with flow-through barriers, marking the various environmental characteristics and aquatic species found in parts of Arkansas. The Arkansas Game & Fish Commissions main components of law enforcement, wildlife management, and local fisheries are also emphasized in additional exhibits.

A nature gift shop is located in the facility to provide unique gift and souvenir items to take home as mementos of your stopover. If the tour has taken its toll on your feet, a comfortable area for lounging is provided. Sit down and enjoy the beauty of the Arkansas River shoreline and natural sights. You may also enjoy the gardens surrounding the building. Feeders attract a variety of native hummingbirds.
4

Among the categories of items available are apparel, media, home and office knick knacks, art, collectibles, and children’s items. Of particular interest is the group of items featuring global goods from areas such as Haiti. Featured hand-made crafts and trinkets compose this selection. For the Bill Clinton fan there is also a section of merchandise bearing the slogan “I Miss Bill”. As an added incentive to open one’s pursestrings, every purchase over $30 receives a FREE “I Miss Bill” bumper sticker.

The store is located in one of many refurbished warehouses, dating from the early 20th Century, that blanket the River Market District. For even the frugal tourist, a visit to this location is worth seeing the fine work that craftsmen accomplished in restoring this once decrepit building.
5

The Museum of Discovery is Pulaski County’s oldest museum facility. Originating in 1927, it was founded by author and community activist, Julia Burnell (Bernie) Smade Babcock. Bernie Babcock started the museum in response to the national perception that Arkansas was a backward state with a lot of “bumpkins”. The museum was first named the Museum of Natural History and Antiquities and with its first home being a storefront on Main Street in downtown Little Rock. Babcocks’s museum started with exhibits collected from world travelers sympathetic to her cause. Some of her displays stirred a lot of conversation with their “questionable” themes such as “King Crowley”, a sandstone head discovered in Craigshead County and purported to be an archaeological relic from Arkansas’ primitive history. Though rejected as authentic by scientific opinion, King Crowley was proudly displayed in the museum without affecting the institution’s reputation or that of Bernie Babcock.

In 1929, Babcock gave the museum to the city of Little Rock. As time progressed, the museum gained professional accreditations, took a name change, and finally settled at its current facility in February 1998. The facility has been temporarily closed since April 2011 to allow for a $9.2 million renovation, increasing the establishment’s area by 13,000 square feet. The newly remodeled building is scheduled to reopen in January 2012. The museum is designed to provide lots of interest for all ages with a vast array of interactive demonstrations, live animal exhibits, historical and technological displays. Throughout the year, special events are part of the institution’s sponsorship itinerary to promote its mission purposes to the community.
6

One of the first establishments of Little Rock’s River Market project is Ottenheimer Market Hall. This 10,000 square foot structure with a 40 foot vaulted ceiling houses multiple specialty food vendors. Here, one can find entrepreneurs selling pizza, meats and cheeses, Mediterranean delicacies, Oriental cuisine, Italian specialties, and much more. It is a delectable smorgasbord of enticing food items irresistible to the neighboring business community and city visitors. The food choices offered here will appeal to any palette.

The market hall has an abundance of available seating. Visitors purchase from their vendor of choice, then gather at a table with friends and family and enjoy their delicious selections. Attendants are on hand to assure that messes are kept to a minimum and tables are kept sanitary. Limited outdoor seating is also offered to take pleasure in a picnic-style lunch.

Among some of the vendors at Ottenheimer Market Hall is the Middle Eastern Cuisine. This is the only remaining original food vendor from the grand opening of the hall. One of its specialties is the gyro sandwich, made with fresh beef and lamb or chicken and vegetables. It is a well known favorite in the area.

Ottenheimer Market Hall will definitely provide you with the fuel you need to continue your tour of the River Market District. Prior to your departure, you will want to visit the River Market Grocery located near the south entrance of the hall. Smoking supplies, canned drinks, toiletries, etc. are there for your convenience.
7

Formerly known as the Arkansas Territorial Restoration, the Historic Arkansas Museum offers a glimpse into pre-civil war society in the region. The site portrays an entire one block area of territorial dwellings. This staging includes the oldest standing house in Little Rock. This was also the place where Arkansas’ newspaper, the Democrat/Gazette was first printed for distribution. The museum is open year round to give visitors an understanding of Southern life in a primitive Arkansas. Features include presentations by “living” historic figures and annual special events featuring live re-enactments of period happenings.

Inside the Museum Center are distinct galleries featuring contemporary art, children’s interactive displays, and an award winning introductory film. A gift shop presents offerings of arts and crafts like those produced in primitive Arkansas. The Museum Center also serves as a teacher resource center providing lesson plans and media assistance for use by educators.

Making this site the last spot of the tour gives visitors an appreciation of the advances made by adventurous pioneers and city fathers. Their efforts and courage changed this region from a wild underdeveloped section of the Louisiana Purchase to a state of modern commerce and tourism.