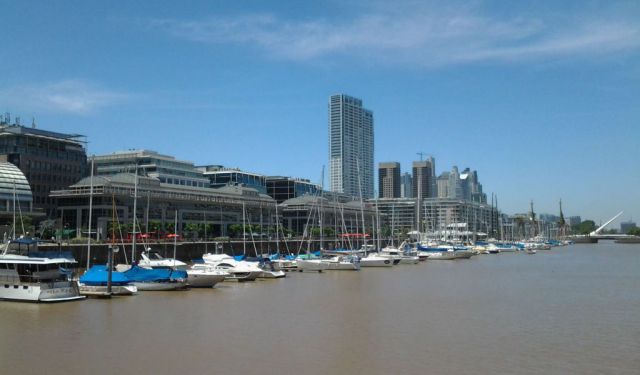 The French critic Pierre Restany, a frequent visitor to Buenos Aires over the years believed that in the years to come the South as a global concept would become as he put it “a global concept…of a new virtual order”. His vision appears to have become a reality as new museums and galleries open in Buenos Aires and transform it into a major center for Art.
This article is featured in the app "GPSmyCity: Walks in 1K+ Cities" on iTunes App Store and Google Play. You can download the app to your mobile device to read the article offline and create a self-guided walking tour to visit the attractions featured in this article. The app turns your mobile device into a personal tour guide and it works offline, so no data plan is needed when traveling abroad.

Create Your Own Self-Guided Walks in Buenos Aires
Guide Name: Art Museums and Galleries
Guide Location: Argentina » Buenos Aires
Guide Type: Self-guided Walking Tour (Article (D))
# of Attractions: 15
Author: Daniel Lange
Author Bio: Daniel Lange was born in Buenos Aires in 1955. He is a writer and a painter. He was brought up and educated in the United States. He has lived in France and Italy for many years. He presently lives on a small farm outside the town of Cachi in the high desert of Northwestern Argentina.
Sight(s) Featured in This Guide:
1

The MALBA Museum – Fundacion Costantini opened in 2001 and houses the Eduardo Costantini collection of 20th Century Latin American Art which is being enlarged on a continual basis. In addition to the permanent collection of 20th Century masterpieces of Latin American Art which includes paintings by Frida Kahlo, Diego Rivera and Tarsila do Amaral, just to name a few; there are several temporary exhibits at the museum at any one time. There is also programming of films and courses on Literature. Guided tours in English are available. Cost is 80 pesos per person for a minimum of ten people. Two-week advance reservation required: educacion@malba.org.ar
Image by malba.org under Creative Commons License.
2

The Museo Nacional de Bellas Artes was for a long time the leading art institution in the city. Although there are now many other museums since its creation in 1896, it contains an important collection of paintings from local artists, beginning with Prilidiano Pueyrredon’s depictions of life in the mid-nineteenth century to Marta Minujin’s painted mattresses from the late 60’s and beyond. In addition, it also houses relevant paintings and sculpture from diverse schools of European Art. The local collectors had a preference for French painting and for this reason the permanent collection consists of several Manet, Monet, Gauguin, Renoir and Degas among other notable artists. Its present location dates from 1932.
Image by mnba under Creative Commons License.
3

Amalia Lacroze de Fortabat (1921-2012) according to Forbes became the wealthiest woman in Argentina. This outstanding building (2008) houses an eclectic collection which the fashionable Amalia amassed during her life and which includes some Egyptian antiquities as well as her portrait by Andy Warhol. But what is most noteworthy about the collection are the many established Argentine artists from the 20th Century which includes some Berni, Fader, Alonso and Uriburu among the many paintings that make up the collection. There is a café, laColeccion, overlooking the old port (Puerto Madero) where you can have lunch or coffee. For guided tours in English phone or mail visitas@coleccionfortabat.org.ar
Image by coleccionfortabat under Creative Commons License.
4

The Museo de Arte Hispanoamericano is a museum dedicated to the art of the colonial period in Latin America. Its permanent collection is divided into three parts: the art of the Southern Andean region, the art of the Jesuits in the jungle and the art of Buenos Aires as Vice-royal capital. The collection consists of metalwork, ceramic, religious imagery, dress and furniture from the 16th to 19th centuries. In addition, there is a collection of musical instruments and dolls and toys from the 19th and early 20th centuries. Worthy of mention is the collection of tortoise shell combs known as “peinetones” which were in fashion in Buenos Aires in the first half of the 19th century among the upper classes. The building itself was once a private residence and has a garden and belonged to the Noel/Fernandez Blanco family hence its name Palacio Noel in the Neo-colonial style. The house was finished in 1922 and from the beginning became a private museum as its owners were avid collectors of colonial art. Guided tours in English, French or German. Request in advance by phone: 4327-0272 or mail: mifb_educativa@buenosaires.gob.ar
Image by museos.buenosaires.gob.ar under Creative Commons License.
5

The Centro Cultural Recoleta as its name indicates, is situated in the heart of the Recoleta neighborhood, adyacent to the Basilica Nuestra Señora del Pilar completed in 1732. The cultural center which consists of many exhibition halls on several levels and an auditorium is undeniably the city's most important cultural center. There are no permanent collections but an array of exhibits, concerts, theater and cultural events in general on a permanent basis. The building was also part of the Franciscan convent along with the church. It later became a nursing home for the elderly until it was renovated in 1980.
6

The Galeria Rubbers was founded by Natalio and Elena Povarché in 1957. The present director of the gallery is the founders' daughter. The first exhibit dating from 1957 was called "Pintura mágica" and included works by Xul Solar. In 1964, Fernando Botero, the Colombian artist, exhibited here. In 1966, an Andy Warhol show was held here. The gallery exhibits established artists such as Xul Solar, Figarí, Macció, Seguí and Noé among others.
Image by www.rubbers.com.ar under Creative Commons License.
7

When Ruth Benzacar, the gallery's director died, her daughter, Orly took over. In a basement at the beginning of Florida Street, the gallery has several spaces under the street level. It was for many years known for its leading role in the exhibition of contemporary Argentine artist. Although, no longer alone in this role it is still a reputable gallery which displays photography, paintings and installations of artists such as Liliana Porter, Marcos Lopez and Pablo Siquier among others.
8

The Museo de Arte Moderno is in the San Telmo neighborhood. Although it has a permanent collection it is not on exhibit but parts of it can be seen on display in temporary exhibits. There are several temporary exhibits at any one time by contemporary local artists.
9

Galeria Mar Dulce is a unique gallery exhibiting the work of local artists working in small and medium sized paintings, prints and illustrations. It's quite out of the ordinary in that the artists work is nonchalant and unassuming and appears to be conceived to illustrate children's books. The result is charming and unexpected. The gallery owner is Linda Neilson from Scotland.
Image by galeriamardulce.blogspot.com.ar under Creative Commons License.
10

Xul Solar was born in 1887 and died in 1963. He was a personal friend of Borges who he had met while collaborating in the magazine Martin Fierro. The museum is dedicated to his work which was carried out over five decades. Xul Solar was a painter, sculptor, writer and inventor of imaginary languages. He was deeply interested in mythology, religion and astrology and this is evident in his work.
Image by www.xulsolar.org.ar under Creative Commons License.
11

The Museo de Arte Contemporaneo de Buenos Aires was inaugurated in September of 2012 with the intention of displaying geometric abstract art by both local and international artists. It is situated next to the Museo de Arte Moderno in the San Telmo neighborhood. It houses a permanent collection and also organizes temporary exhibitions.
12

Fundacion Proa is located in the La Boca neighborhood depicted by such painters as Quinquela Martin. The initial renovated 19th Century building was inaugurated in 1996 and the adjacent new building dates from 2008, transforming Fundacion Proa into a major art space which exhibits both local and foreign artists from around the world. There are only temporary exhibits here of undeniable transcendence. The space has a bookstore and restaurant as well as an auditorium.
13

The Faena Arts Center is part of a hotel complex created by the developer and restaurant and hotel owner Alan Faena (1966) who together with the French designer Phillipe Stark has devised a truly remarkable hotel nearby. The Faena Arts Center hosts temporary exhibits of contemporary art and site specific work.
Image by www.faena.com under Creative Commons License.
14

The Elsi del Rio Gallery is one of several galleries exhibiting contemporary art in the Palermo Hollywood neighborhood, also known for its bars and restaurants. It exhibits the work of emerging and established local artists. Richard Sturgeon, Mariana Vidal and Gabby Messina are among its artists working in a variety of mediums.
15

The Nora Fisch Gallery first opened its doors in 2010 with the intent of exhibiting contemporary art by emerging local artists. The gallery is in the process of relocating during the summer months of 2014 (January, February. The work of the gallery's emerging and mid-career artists such as Lux Lindner, Fabiana Barreda and Tiziana Pierri, can be viewed at a temporary address and an appointment is required.
Image by www.norafisch.com under Creative Commons License.