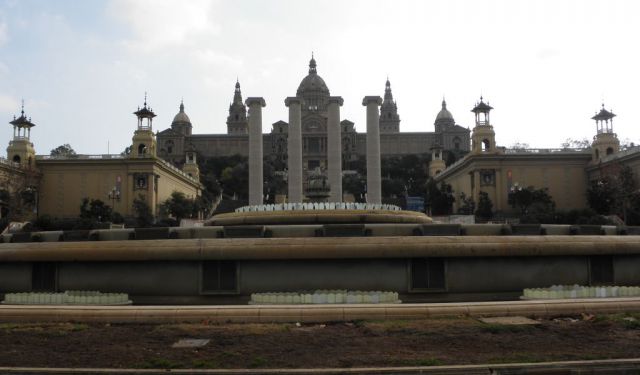 Rising over the city, Montjuic is a beautiful wooded park that provides splendid views of Barcelona. The park gained notoriety as host of the 1929 World Fair and the 1992 Olympic Games. It is home to many impressive sights, including a prominent collection displayed in the Museu Nacional d’Art de Catalunya.
This article is featured in the app "GPSmyCity: Walks in 1K+ Cities" on iTunes App Store and Google Play. You can download the app to your mobile device to read the article offline and create a self-guided walking tour to visit the attractions featured in this article. The app turns your mobile device into a personal tour guide and it works offline, so no data plan is needed when traveling abroad.

Create Your Own Self-Guided Walks in Barcelona
Guide Name: Barcelona's Montjuic Tour
Guide Location: Spain » Barcelona
Guide Type: Self-guided Walking Tour (Article (A))
# of Attractions: 8
Tour Duration: 3.0 Hour(s)
Travel Distance: 7.7 Km or 4.8 Miles
Author: Benjamin Jennings
Author Bio: Ben’s love for travel started at a young age. By the time his teenage years had arrived, he was already planning around the world trips. His fascination to learn about other cultures drove Ben to spend several years living deep in the jungles of West Africa. Today he calls Barcelona home, where he works as a travel writer and website designer, fulfilling his childhood dreams of being a professional traveler.
Sight(s) Featured in This Guide:
1

Plaça Espanya is one of Barcelona’s most important squares. Until the early 1700’s this site was used for public hangings. When Montjuïc was selected to host the 1929 International Exposition, Plaça Espanya was transformed into what we know today. The central monument, designed by Joseph Amargós, contains fountains and a flame that can best be seen at night. The two large 154 ft tall replicas of the towers of Venice, also built as part of the 1929 International Expo, stand guard over the main access to the park and exposition center. Plaça Espanya is also home the Arenas de Barcelona, a bull fighting ring that was built in 1900. Due to the current unpopularity of the “sport” and the recent ban on bull fighting in Catalonia, the arena is now being transformed into a shopping mall.
2

Font Màgica was built in 1929 as part of the International Exposition. It was designed by Carles Buigas, an innovator in illuminated fountains. The complex design was called over-ambitious, requiring the work of over 3000 labors during the year leading up to the expo. Finished just in time, the first show took place on May 19th, 1929, only one day before the opening of the International Exposition. The fountain was badly damaged in the late 1930’s during the Spanish Civil War. It did not operate again until it was restored in 1955. In the late 1980’s music was incorporated into the show. Behind the fountain stand the Four Columns. These columns were originally built in 1919 as icons of Catalanism, representing the four bars found on the Catalan National Flag. The columns were removed in 1928 by the dictator Primo de Rivera in an effort to squash the Catalan Separatist Movement. They were reinstalled in 2010. The fountain show runs every half hour between 7pm and 9pm on Fridays and Saturdays during the winter season (October thru April). During the summer season (May thru September) the fountain show starts ever half hour between 9pm and 11pm from Thursday thru Sunday. There is no admission charge.
Image by Ivan Serrano under Creative Commons License.
3

The Palau Nacional is clearly the icon and centerpiece of Montjuïc. Built between 1926 and 1929, the 350,000 sq foot palace was built as the main exposition hall for the International Exposition of 1929. The building consists of two large wings and a central body that is crowned by a large romances dome. In 1934 the palace became home the Museu d’Art de Catalunya, but was closed two years later due to the Spanish Civil war. It was later reopened in the early 1940’s. Today the Palau Nacional is home to the Museu Nacional d’Art de Catalunya (MNAC), and its impressive collection of Catalan art spanning from the Romanesque period to the mid-twentieth century. While the majority of the MNAC collection is Catalan, the Gothic collection contains pieces from other regions. The museum can be visited between 10am & 7pm Tuesday to Saturday and from 10am to 2:30pm on Sunday. It is closed on Mondays. Admission is 8.50 Euros. Free admission is offered the first Sunday of the month. A combination ticket for the MNAC and Poble Espanyol is available for 12 Euros (saving you 5 Euro).
4

Poble Espanyol, is a one of a kind outdoor architectural museum. The 117 buildings and squares are replicas built to represent the unique architecture that makes up the various regions of Spain. It was built as part of the 1929 International Exposition, with a promise that visitors would “get to know Spain in one hour”. Today the Spanish Village hosts a variety of artisan workshops where you can see engraving, weaving and pottery among other crafts. The village also hosts restaurants, cafes and even a popular dance club. Arrive early to avoid tourist groups, or visit late at night to enjoy the empty streets and an occasional concert. Open Monday from 9am to 8pm, Tuesday thru Thursday from 9am to 2am, Friday & Saturday from 9am to 4am and Sunday from 9am to midnight. Admission is 9 Euros or can be purchased in combination with MNAC.
5

The Anella Olímpica was the main site of the 1992 Olympic Games. The Olympic Stadium sits at one end of the park. Built in 1929, the 56,000 seat stadium was to host the People’s Olympiad in 1936. However, due to the outbreak of the Spanish Civil War the “anti-fascist” protest to the Berlin Olympic Games was cancelled. The stadium was renovated to host the 1989 World Cup in Athletics and the 1992 Olympic Games. Recently the stadium was host to the 20th European Athletics Championships. Next to the stadium you will find the Palau Sant Jordi indoor sporting arena. Designed by a Japanese architect, the arena was opened in 1990 and can seat up to 24,000 spectators. In 1992 it hosted the artistic gymnastics and both the handball and volleyball finals of the Olympic Games. Today the arena hosts many major sporting events and most of the large concerts that come to Barcelona. Across from the arena is the Picornell Swimming Complex. The complex was built in 1970 to host the European Aquatics Championships, it houses three swimming pools and has a maximum capacity of 10,000 spectators. It was renovated in 1990 and hosted the swimming events of the 1992 Olympic Games. The 446 ft iconic Telefónica Tower is also found in the Olympic park. It was built in 1989 and was used to transmit television coverage of the 1992 Olympic Games, and is said to represents the Olympic Flame.
6

6) Museum of Sports and Olympics

On top of Monjuïc was the site of many fortifications. However, the sole remaining today is Castell de Montjuic. The “castle” was built mainly during the 17th century, with several additions to it made during the 18th century. It was primarily used as a military outpost to protect the harbor below. Later it was also used as a prison and was the site for many notable executions both before and during the Spanish Civil War. The outer walls of the fortification are angular, designed to deflect artillery. While strangely, the inner part of the fortification appears medieval, with its straight walls and square shape. The castle is open to visitors year round from 7am until 8pm. Entrance is free of charge.
8

The Cemetery of Monjuic, officially called Cementiri del Sud-oest, is a rare splendor for travelers. This above ground cemetery was opened in 1883, while Barcelona was experiencing massive economic and demographic growth. It was part of a new trend focusing on hygiene, which moved burial places away from the city center. It is the final resting place for more than one million people, including many of Barcelona’s wealthiest and most prominent figures. Most of the tombs are family tombs, reflecting the strong family ties of the Catalan culture. The cemetery can be visited year round free of charge between 8am and 5:30pm.