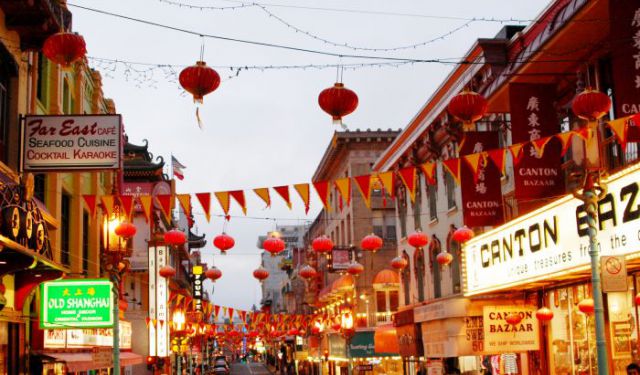 San Francisco’s Chinatown is the largest outside of Asia and the oldest in North America. The streets are shoulder-to-shoulder with people on their produce run. Skinned ducks hang in the store windows along with piles of ginger and tanks of live fish. In Portsmouth Square, “Chinatown’s living room,” the older generation plays chess, cards, and mahjong. It is San Francisco’s city within the city.
This article is featured in the app "GPSmyCity: Walks in 1K+ Cities" on iTunes App Store and Google Play. You can download the app to your mobile device to read the article offline and create a self-guided walking tour to visit the attractions featured in this article. The app turns your mobile device into a personal tour guide and it works offline, so no data plan is needed when traveling abroad.

This entrance to Chinatown and to Grant Street, the oldest street in San Francisco, was built in 1970 as a gift from the Republic of China. It is inscribed with a quote by Dr. Sun Yat-Sen which reads “All under heaven is for the good of the people.” The characters beneath the left pagoda signify “peace” and “trust,” and “respect” and “love” under the right pagoda. Dr. Yat-Sen was a revolutionary leader who unified China during the early 20th century and who lived briefly in San Francisco as an exile while gaining support to overthrow the Manchu Empire. In 1911, he successfully founded the Chinese Republic and was inaugurated as its first President.
Image by Chris under Creative Commons License.
2

St. Mary’s served as the city’s first and only Catholic cathedral until 1891. It was also the tallest building in San Francisco when construction was completed in 1854 and is one of a handful of survivors of the 1906 earthquake. “Son, observe the time and fly from evil” reads the inscription below the large clock on the front of the tower, a reference to a house of prostitution which used to exist across the street. Now, St. Mary’s organizes weekly noontime concerts which can be heard above the sound of the cable car that passes up and down California Street in front of the church.
Image by Michael Rivera under Creative Commons License.
3

Cold water, temperate climates, and topography combine in San Francisco to produce an almost constant breeze, if not gale force winds. And the Marina Green and Chrissy Field – part of a several-mile strip of land that runs along the Embarcadero between Fort Mason and the Golden Gate Bridge – have become the top kite-flying venues in the city. A family-owned operation, the Chinatown Kite Shop has been in business since 1969. They supply kites of every kind, from paper dragons and butterflies to comic book characters and pirate ships. The kite itself was invented in China over 3,000 years ago. No one quite knows how or where or why, but many argue that it was the first step towards the invention of the airplane.
Image by Gary Stevens under Creative Commons License.
4

The oldest bakery in Chinatown, Eastern Bakery can often be distinguished by its long lines or by the tourists standing outside taking photographs. They are well-known for their coffee crunch cake and for their moon cakes. Traditionally, moon cakes are pastry shells filled with lotus seed paste or salted duck egg yolk. But now they are filled with nearly anything. They are usually served during the mid-Autumn festival in October which celebrates the harvest time, but are served year-round at the Eastern Bakery. There are also three for $1 dumplings, Chinese tamales, pork buns, donuts, and fortune cookies, and a large poster of President Clinton behind the counter to celebrate his visit to Chinatown.
Image by Nicholas Boos under Creative Commons License.
5

Sometimes called “the street of the painted balconies” for its colorful architecture, Waverly Place is one of the most popular tourist attractions in Chinatown. It was also formerly called “15 Cent Street” for the cost of the haircuts there. The street is now an alleyway filled with temples and secret societies. One of the widest alleys in Chinatown, it runs parallel to Grant Avenue and Stockton Street and between Washington and Sacramento Streets. Although a center for religion, it also caters to the day-to-day needs of the neighborhood’s residents with a dry cleaners, travel and employment agency, small retail shops, and cafes.
Image by Gary Stevens under Creative Commons License.
6

The oldest Chinese temple in the United States, dating to 1852, Day Ju, one of the first Chinese immigrants to arrive in San Francisco, dedicated it to Tin How – the Queen of the Heavens and the Goddess of the Seven Seas. Her name means “Mother Ancestor.” Past a mahjong parlor, at the top of a four-story stairwell, its tiny, incense-filled room is hung with red and gold lanterns. Fruit offerings line the many shrines and a statue of Tin How sits in the back. A carving hanging from the ceiling shows the seas that she protects. Photographs are not allowed.
Image by Tim Olson under Creative Commons License.
7

An open-air produce market and the commercial center of Chinatown, Stockton Street’s sidewalks are usually shoulder to shoulder. People walk in the street. Barbecued ducks hang in the windows. Delivery trucks come and go, and the bins and baskets are filled with bok choy, melons, broccoli, and tomatoes, in sometimes neat and sometimes not so neat rows. You can buy dehydrated shrimp or jade or Buddha statues. And on the side of a public housing project at the intersection of Stockton and Pacific Streets, a large and colorful mural by Darryl Mar shows the faces of the community, both young and old.
Image by HaeB under Creative Commons License.
8

Located in an old brick YWCA building, the center tells the story of Chinese immigrants in San Francisco and the West, beginning in the 1880s up until contemporary culture. In a separate room are rotating exhibits by Chinese-American artists. The building was designed by Julia Morgan, a pioneering female architect of the early 20th century who designed most of the YWCA buildings on the West coast, among other projects. Photographs and artifacts in the main gallery describe fishing, agriculture, railroad, and mining activities of the early settlers. The museum houses the largest collection of Chinese-American artifacts in the United States.
Image by Smart Destinations under Creative Commons License.
9

Down a dark alleyway, in an even darker, narrow and dungeonous warehouse, ladies operate giant cookie machines from early morning until late at night. They hand out free broken samples or sell them for less than $5 a bag. The batter is distributed onto circular presses, baked, and folded by hand with a fortune inside, fortunes like “An unexpected event will soon make your life more exciting” or “A four-wheeled adventure will soon bring you happiness.” They rarely repeat themselves. The fortune cookies come in vanilla or chocolate, or both, with “adult” fortunes or regular. There are sesame cookies for sale too.
Image by Mack Male under Creative Commons License.
10

John Montgomery of the U.S.S. Portsmouth first raised the American flag in San Francisco in 1846 at Portsmouth Square. For this reason, it is sometimes called the birthplace of San Francisco. It has also been called Chinatown’s living room, a result of the many cramped housing units in the area. In one of the densest cities in the U.S., Chinatown is its densest neighborhood. Kids are usually playing in the playground. Groups of adults are playing card games or practicing tai chi and from mid-summer to late fall the Chinatown Night Market takes place here every Saturday. A pedestrian bridge crosses Kearny Street and connects the park to the Holiday Inn and to the Chinese Cultural Center.
Image by vhines200 under Creative Commons License.