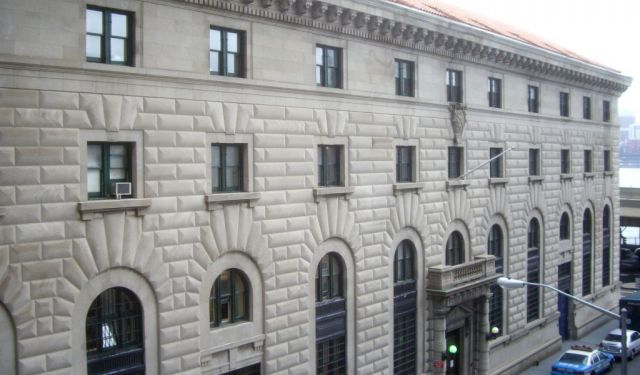 New York City is famed for its museums and some of the best exhibits are housed downtown. With “Museums of Lower Manhattan”, you’ll see NYC in a new light. Visit sights that were significant in the birth of America, where George Washington delivered speeches and US Treasury secured its gold.
This article is featured in the app "GPSmyCity: Walks in 1K+ Cities" on iTunes App Store and Google Play. You can download the app to your mobile device to read the article offline and create a self-guided walking tour to visit the attractions featured in this article. The app turns your mobile device into a personal tour guide and it works offline, so no data plan is needed when traveling abroad.

Create Your Own Self-Guided Walks in New York
Guide Name: Museums of Lower Manhattan
Guide Location: USA » New York
Guide Type: Self-guided Walking Tour (Article (A))
# of Attractions: 8
Tour Duration: 4.0 Hour(s)
Travel Distance: 4.3 Km or 2.7 Miles
Author: Melissa Ruttanai
Author Bio: An avid traveler, Melissa Ruttanai has visited over 25 countries and lived in both Japan and Thailand. Her travel articles have been published by Trazzler.com and On Holiday Magazine. She currently lives with her husband in New York.
Author Website: http://www.worldwinder.com
Sight(s) Featured in This Guide:
1

Located in a renovated 1904 firehouse, the New York City Fire Museum tells the story of New York’s Bravest. Artwork and artifacts offer visitors a glimpse into the past when horses pulled fire engines and oil lamps guided the way through the night. The permanent collection includes antique trucks, helmets and tools as well as maps and memorabilia. Retired FDNY lead exhibit tours and answer questions. Visit the largest indoor 9/11 memorial for the FDNY. 343 shields create a wall of honor, depicting each man that was lost during the attack on the Twin Towers. On specialized children’s tours, workshops educate young visitors about fire prevention and strategies to escape a fire. The gift shop offers popular souvenirs including patches and fire chief hats. Hours: Tuesday-Saturday 10-5pm. Sunday 10-4pm. 212-691-1303.
Image by David Gabay under Creative Commons License.
2

With its dedication to “Person to Person History”, the Tribute WTC Visitor Center welcomes over 300,000 visitors a year with stories and personal accounts of the tragedies of September 11th. The complex is a centralized place for information, where people can come to remember and reflect about those who were lost and those who rose above the strife to serve the community. Five galleries include: the Community Remembers, Events of 9/11, Rescue & Recovery, Tributes to the Victims, and Voices of Promise. Walking tours are offered by survivors, residents, and volunteers who share their memories of that day. Guides lead tours through the neighborhood and to Ground Zero, while layering the day’s events with their own personal accounts. Self-guided audio tours are also available. Maps lead visitors through the site while the voices of survivors and rescue workers tell their stories of a day that began with a blue sky and ended in dust. Hours: Monday, Wednesday-Saturday 10-6pm. Tuesday 12-6pm. Sunday 12-5pm. 866-737-1184.
Image by Aude under Creative Commons License.
3

Through the early history of this country, Federal Hall has played a key role. In 1788, the US Constitution was ratified, making NYC the first capital of the United States of America. George Washington took his oath of office on Wall Street. And in the 18th century, it served as City Hall. Then after the establishment of the US as an independent nation, the building housed the Congress, Supreme Court, and the Executive Branch. Once the capital moved to Philadelphia, Federal Hall became a Customs House and then the US Sub-Treasury, securing millions of dollars in gold and silver in its vaults. Now part of the National Park Services, the Hall is a museum that preserves its own municipal, colonial, and revolutionary histories. Free guided tours are available including the NY Campaign of 1776 and the George Washington Walkabout of NYC. Visit the permanent exhibits that include Washington’s Inaugural Gallery and the Gateway to America, NY Harbor. Hours: Monday-Friday 9-5pm. 212-825-6990.
Image by Gryffindor under Creative Commons License.
4

A beautiful spiral staircase is the centerpiece of the main hall of galleries at the Museum of American Finance. Focused on the financial history of America, the museum promotes a better understanding of financial markets and the nation’s economy. Exhibits include: the History of Money, Banking in America, Entrepreneurs, The Financial Market, the Credit Crisis, and the Hamilton Legacy. Alexander Hamilton was the first secretary of the Treasury and laid the foundation for a capitalistic system in the US. This room is an account of his life from his birth in the Caribbean through his military career and political success. His ideas were considered radical for the time but his accolades include the creation of the first national bank, the establishment of the tax system, and control over the national debt. Guided tours are available and classrooms may be reserved for special programs held by museum educators. Hours: Tuesday-Saturday 10-4pm. 212-908-4110.
Image by John Trumbull under Creative Commons License.
5

Preserving the history of one of the largest and most famous police services, the New York City Police Museum houses artifacts from as far back as the days of Dutch settlement. Located in the building of NYPD’s First Precinct, the station was completed in 1911 and serviced lower Manhattan for several decades until reorganization moved the offices uptown. With the facilities restored, the collection spans three floors and includes photographs, radios, motorbikes, and a jail cell. A new Junior Officers Discovery Zone is an interactive area in which younger visitors can step into the role of police officers, hear radio calls, and drive emergency vehicles. To commemorate the bravery, compassion, and camaraderie of 9/11 responders, Aggie Kenny has donated several sketches that depict the emotion of the days following the tragedy. Visit the Hall of Heroes to view the shields of officers who’ve lost their lives since 1857. Hours: Monday-Saturday 10-5pm. Sunday 12-5pm. 212-480-3100.
Image by Dmadeo under Creative Commons License.
6

In 1762, the private residence of Stephan Delancy was bought and transformed into Fraunces Tavern, one of lower Manhattan’s most popular public houses. Constructed in 1719, the building is best known for wartime activities that took place within its walls. In its collection, weapons, documents, relics, and artwork tell the story of growing colonial unrest and the revolution that severed British control over America. At the dawn of American autonomy, the tavern rented space to the Department of War, US Treasury, and Foreign Affairs. In 1783, George Washington delivered his farewell speech at Fraunces Tavern. With renovations funded by the Sons of the Revolution, the tavern maintains its colonial appearance, welcoming visitors to its museum and restaurant. Embracing its original role as a place to refuel and relax, the tavern’s restaurant offers a full menu and a staff knowledgeable in the history of the museum. Hours: Monday-Saturday 12-5pm. 212-425-1778.
Image by Fraunces Tavern Museum, New York City under Creative Commons License.
7

Housed in the historic Alexander Hamilton US Customs House, the American Indian Museum is dedicated to representing the diversity of the Americas. Catalogued at over 250,000 objects, the collection embodies the cultures of over 1200 indigenous peoples. Wander the exhibits to view beadwork, weaponry, featherwork, and painted hides. Learn about Sitting Bull, Geronimo and Standing Bear. The museum showcases religious, artistic, and historical relics from the Plains to the Plateau and from Canada and the Caribbean to the Amazon and Peru. Modern and contemporary displays let visitors see how these cultures continue today while special exhibits such as “Code Talkers” discuss the roles of indigenous peoples during wartime. Hours daily 10-5pm. 212-514-3700.
Image by Wm. Notman & Son under Creative Commons License.
8

“The Skyscaper Museum celebrates the city’s rich architectural heritage and examines the historical forces and individuals who shaped its successive skylines.” At the museum, curators and staff consider each of the city’s high-rises as contributing elements to Manhattan’s personality as well as its past, present, and future. From the Trump Towers to the Empire State Building to the Freedom Tower, these buildings are historical markers that commemorate eras in the city’s long life. Exhibits focus on architecture and construction of historical American sites, a model of Burj Dubai (the tallest building in the world), maps and photos of Manhattan’s skyline through the centuries, and a model of Manhattan’s downtown and midtown, hand carved by Michael Chesko. Hours: Wednesday-Sunday 12-6pm. ‪ 212-968-1961.
Image by Emiliano Marin under Creative Commons License.

New York City is often defined by the word “skyscraper.” However, other than high-risers, the city is also famous for the variety of beautiful places of worship renowned for their architecture splendor. Take this self-guided walking tour to explore the top religious sites of New York.