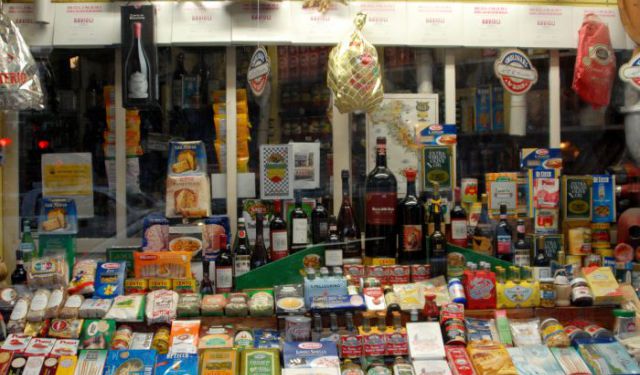 Before the coastline was landfilled, North Beach was in fact a beach. The district was known as the Barbary Coast and its heyday coincided with the Gold Rush. Until the anti-vice campaigns of the early 1900s, it was a place of crime, prostitution, and gambling. During the 1800s, Italian immigrants began to flood the area leaving what would be the most lasting cultural influence in the neighborhood.
This article is featured in the app "GPSmyCity: Walks in 1K+ Cities" on iTunes App Store and Google Play. You can download the app to your mobile device to read the article offline and create a self-guided walking tour to visit the attractions featured in this article. The app turns your mobile device into a personal tour guide and it works offline, so no data plan is needed when traveling abroad.

Designed by architect William Pereira, the 853-foot Transamerica Pyramid became, in 1972, San Francisco’s tallest building. Until 1974, it was the tallest building in the United States west of the Mississippi River. The structure has 48 floors and 3,678 windows. The top spire measures 212 feet and houses a book signed by those who have visited. Its shape was chosen in order to allow for more natural light and air space in and around the building, and its distinctive white color is due to a layer of crushed quartz which covers the surface. In 1999, a Dutch insurance company acquired Transamerica and retains ownership of the pyramid.
Image by Dominic Simpson under Creative Commons License.
2

At the intersection of North Beach, Chinatown, and the Financial District, and just across the street from the Transamerica Pyramid, the original Transamerica Building is a three-story flatiron-shaped structure that has housed the Church of Scientology since 2003. The building has also been home to Sanwa Bank and Fugazi Bank. The third story was added in 1916, and in 1928 Fugazi and the Bank of America merged to form the Transamerica Corporation. Built in 1909, it still retains the style of the era. Except now throughout the first floor are panels describing the tenents of Scientology and quotations by L. Ron Hubbard, the religion’s founder.
Image by T1o under Creative Commons License.
3

The Jackson Square Historical District – between Broadway, Sansome, Washington, and Columbus – contains some of the oldest commercial buildings in San Francisco, and the 400 block some of the best preserved. At 415-431 Jackson Street, Domingo Ghirardelli first opened the chocolate factory which would later lend its name to Ghirardelli Square further west along the Embarcadero. Built in 1853, his family lived on the second story. At 400 Jackson is the Grogan-Lent-Atherton Building. Its occupants included William Lent – president of a mining company which helped to finance the Comstock Lode, Faxon Atherton – a merchant and one of the wealthiest men in California during the early 19th century and whose San Mateo County property became the town of Atherton, and Alexander Grogan – Atherton’s business agent. Two abandoned ships lie below 435-441 Jackson Street, once a wine, tobacco, and coffee warehouse. No. 472, built in 1852 and possibly the oldest building in the district, first housed a French wine company.
Image by Chris under Creative Commons License.
4

Built in 1907 just following the 1906 earthquake, the Sentinel building – also known as Columbus Tower – is one of San Francisco’s few flatiron structures. During the 1930s, politician Abe Ruef worked on the top floor before he was sent to San Quentin prison across the bay in Marin County for graft. A restaurant and speakeasy named Caesar’s Grill used to occupy the ground floor before it was shut down for violating Prohibition regulations. Now, the offices for Francis Ford Coppola’s film production company, American Zoetrope, occupy the upper levels. Coppola also runs the restaurant downstairs, Cafe Zoetrope, an extension of his winery in Napa Valley.
Image by sw77 under Creative Commons License.
5

A colorful, hand-painted saloon just opposite City Lights and the former hangout of Dylan Thomas, Ferlinghetti, Jack Kerouac, and Allen Ginsburg, Vesuvio is still the dark, jazzy neighborhood bar that it has always been with a little bit of an old-western feel. A wooden staircase leads to a second-story balcony with views of North Beach and of the bar below. The décor is stained glass and neoclassical art with a gaslit chandelier above the bar and the occasional book-reading and chess-playing patrons. A San Francisco institution frequented by the locals as much as by the tourists, it can be dusty and charming and only serves drinks.
Image by Dan DeLuca under Creative Commons License.
6

City Lights was co-founded in 1953 by Beat poet Lawrence Ferlinghetti and by Peter Martin, a New Yorker who taught sociology at San Francisco State University. The store was named City Lights after a pop culture magazine that Martin founded there. The title was a reference to a Charlie Chaplin film of the same name which involves a blind flower girl who mistakes Chaplin for a millionaire. A flower shop used to occupy the entrance room where the cash register is now located. The store was the first all-paperbound bookstore in the country and later became a publishing house as well as a gathering place for Beat writers like Jack Kerouac, Allen Ginsberg, and Neal Cassady.
Image by Chelsea Marie Hicks under Creative Commons License.
7

Another former Beat hangout and the place where Francis Ford Coppolla legendarily wrote his screenplay for The Godfather, Caffe Trieste serves coffee, beer, wine, sandwiches, salads, pastries, and pizza. Sometimes there is live music and usually there are some writers, tourists, and local characters. On the walls hang photos of the owner with Coppola, Pavaratti, and as a member of the Italian navy. The cafe is located just off Grant Avenue – the oldest street in San Francisco and once the main North Beach thoroughfare. In 1845, the street was called Calle de la Fundacion (or street of the founding) at a time when San Francisco was a pueblo named Yerba Buena.
Image by Mobilus In Mobili under Creative Commons License.
8

A traditional Italian deli, Molinari’s has been serving prosciutto, wine, pasta, and ravioli in large quantities since 1896. The lunchtime waits can be long and the sandwiches can be a little pricey but the staff is friendly, the sandwiches are huge, and there are a few tables outside for eating and people watching. The famous Molinari salami is sold at Napa wineries and at high-end grocery stores around the Bay Area. And right around the corner at 1362 Stockton Street and Vallejo is Victoria Pastry, one of San Francisco’s oldest bakeries, famous for their Saint Honore cakes – a rum-soaked sponge cake with custard-filled cream puffs and Bavarian cream.
Image by Eugene Kim under Creative Commons License.
9

Club Fugazi is home to San Francisco’s longest-running show, Beach Blanket Babylon, known for its extravagant hats, political satire, and over-the-top musical numbers. The show is updated regularly with the latest trends in music, entertainment, and politics. As known for its outrageous hats as for the performance itself, one holds a 30-foot Transamerica Pyramid and the rest of the San Francisco skyline, another a giant box of chop suey. The theater is relatively small with wood chairs, and the seating is first come first serve. Except for the Sunday matinees, where the show is edited and the jokes are scaled down, you must be at least 21 to attend.
Image by Ed and Eddie under Creative Commons License.
10

To one side is St.Peter and Paul’s Church. Next to that, a line will most likely be forming outside of Mama’s Restaurant for the weekend brunch. At the corner of Filbert and Stockton, the Washington Square Inn dates to 1910, when it was an office building and pharmacy. Across the way, Mario’s Bohemian Cigar Store patrons people-watch from the windows overlooking the park. Columbus Avenue and its many wonders is just down the street, and Coit Tower just across the way. Continuing on Columbus Avenue past the park will bring you to Ghirardelli Square, Fisherman’s Wharf, and the San Francisco Bay.
Image by David Ohmer under Creative Commons License.
11

Coit Tower was commissioned by Lillie Hitchcock Coit, a volunteer firefighter who was herself rescued from a fire when she was eight years old. The tower is dedicated to the firefighters of San Francisco. Inside are murals by 26 Depression-era artists in the social realist style of Diego Rivera depicting working class Californians of the time. From the top of Telegraph Hill where the tower is located, it is possible to see the Golden Gate Bridge, the Bay Bridge, the Transamerica Building, Lombard Street, and everything in between. An elevator also brings visitors to the top of the building for 360-degree views of the city.
Image by Sarah Sammis under Creative Commons License.